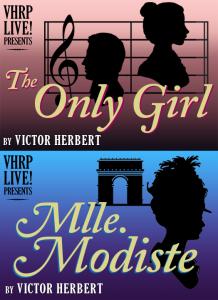 All performances take place at :
The Theater at St. Jeans
150 East 76th Street, at Lexington Ave.

Box office will open January 1, 2022
Proof of vaccination required for entrance and masks must be worn by all attendees.

Celebrate VHRP LIVE’s return to live performance on February 22-24th, 2022, and enjoy The Only Girl at our new home at The Theater at St. Jeans. This fully equipped theater features a raked auditorium with 204 plush seats, opera acoustics, unobstructed sight-lines, an orchestra pit, a lobby with seating, restrooms, and an elevator for accessibility. Save the date when this season ends with Mlle. Modiste, Herbert’s 1905 Operetta about a charming hat shop girl in Paris with big dreams. Mlle. Modiste runs from April 26th-April 28th, 2022.

When librettist Alan Kimbrough hears a haunting melody drifting from his neighbor’s apartment, he becomes obsessed. On the hunt for a collaborator, “Kim” insists on meeting the man who wrote the composition. Delight in Ruth and Kim’s repartee as they raise eyebrows and match wits in a battle of the sexes that was ahead of its time. Will they make beautiful music together?

The Only Girl arrived on Broadway on November 2, 1914, as Suffragettes were marching in Manhattan, and World War I was well underway in Europe. It was a musical comedy about the present. Ruth’s song is the popular melody “When You’re Away,” a beautiful ballad by Herbert that has managed to remain in front of audiences well into the 21st century.

The Victor Herbert Renaissance Project LIVE! is the world’s only company exclusively dedicated to reviving the work of Victor Herbert, an Irish American composer, conductor, musician, and orchestration legend. Herbert indelibly influenced the foundations of American musical theater by writing for, and placing the full orchestra into the Broadway Theater Pit in 1892.
For more information visit www.vhrplive.org.