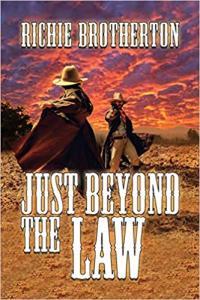 A Mysterious Hero Appears! — Protector of the Town of Showdown

“Tye ducked the first blow and hit the rider in the jaw with a solid right that took the rider down. Surprisingly, he popped right up after the punch. The two fighters swapped a few punches.”—”
— by Richie Brotherton.

LOS ANGELES, CALIFORNIA, UNITED STATES, April 19, 2022 /EINPresswire.com/ — Author Richie Brotherton will be one of the featured authors in the upcoming Los Angeles Festival of Books 2022 with his published book titled Just Beyond the Law. A wild West adventurous novel is happening in a small old West town of Showdown in Texas. Brawling, fighting, and killing are stirring up the community and bothering the people living there peacefully. Then, one day an inscrutable person not from their town appears in a flash and starts to solve the town’s problems.

Several bodies of assassins and gunslingers pile up like a hill, and the sheriff becomes curious and the people applaud the actions of the stranger: If one man can make a difference, a community joining their hands cooperatively and solving the dispute, it will surely change the events happening in their community.

Richie Brotherton resides in Texas. He worked as a cowboy when he was young. He is a former coach of pre-high school baseball and basketball, and spent his time bird hunting and working with music and athletics. Mr. Brotherton loves writing and music.

Just Beyond the Law
Written by: Richie Brotherton
Kindle |
Paperback |