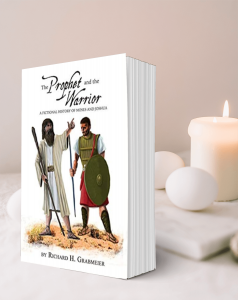 Author Tells Us the Greatest Biblical Drama in

“In truth, I know not where I wander or where I shall come at rest. I fled Egypt in the dark of
night and was pursued into Paran. I think Pharaoh’s guards have returned to Egypt.”
— Richard H. Grabmeier.

LOS ANGELES, CALIFORNIA, UNITED STATES, April 8, 2022 /EINPresswire.com/ — Author Richard H. Grabmeier will be one of the featured authors in the upcoming Los Angeles Festival of Books 2022 with his published book titled The Prophet and the Warrior: A Fictional History of Moses and Joshua. It is a religious-historical fiction novel that is fascinating for its view of the biblical story of Moses. The book enhances the various stories byadding dialogue and expanding the role of different characters. The author’s own religious
experience prompted him to read the Bible with a more critical eye.

“The novel sees the Israelites struggle to make their way through the wilderness, fighting hostile tribes that see them as another form of locusts, sent to destroy the land and kill their people. The great biblical drama, and the sweeping ancient Middle Eastern world, are made enjoyable via grounded depictions of the landscapes and cultures that the Israelites meet.” — Reviewed by Jeremiah Rood, Foreword Reviews.

Richard H. Grabmeier served as a military instructor and technical writer with the rank of Staff Sergeant during service at Fort Belvoir, Virginia, and in Saigon, Vietnam, in the late 1950s. During that time, he taught the construction of early computer memory systems, supervised crews of up to forty men, and controlled a budget.

The Prophet and the Warrior: A Fictional History of Moses and Joshua
Written by: Richard H. Grabmeier
Kindle |
Paperback |