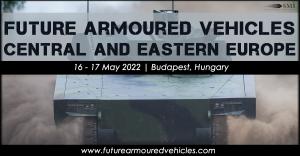 Briefings from across Europe and beyond, providing insights into the latest technological and doctrinal developments with a focus on interoperability with NATO partners.”
— Richard Jones, Manager Future Armored Vehicles Central and Eastern Europe

FAVCEE is continuing to provide a world class event focused on military vehicles based in Europe, assisting with the continued learning and development of armoured vehicle programme managers and practitioners through briefings, panel sessions and focused discussion groups. Unlike other events, we strive to deliver real insight and learning experiences through the expertly selected participants who run our discussions ensuring the latest developments from all parts of the community (industry and military) are covered, in detail.

This conference will provide an enormous range of insight from many different nations and bring together many senior leaders from within the Hungarian Armed Forces. Briefings during the two-day conference will examine what these nations are doing to enhance and overhaul their fleets of armoured vehicles, and embrace new technologies.

Prof Gen (Ret) Zoltán Szenes holds MSc from the Defence College of Logistics and Transport (Sankt Petersburg, Russia) and the Budapest University of Economic Science (world economics) and PhD (Military Science) from the National Defence University, Budapest. He was also member of Royal College of Defence Studies, London, in 1995. During his active military carrier, he had different staff and command positions in tank regiment, infantry division, Command of the Hungarian Defence Forces and Ministry of Defence of Hungary. He was the Hungarian Military Representative at NATO and WEU in Brussels in 1998-1999. From 1999 – 2002, he served with NATO AFSOUTH as Chief of Logistics Division in Naples (IT). He was Chief of Defence of Hungary between 2003-2005. He teaches Security Studies, NATO Studies, International and Hungarian defence policies at BA, MA, and PhD level at National University of Public Service, Ludovika. Gen Szenes was the Chair of the Committee for the Military Sciences at the Hungarian Academy of Sciences (2008-2014). He was an Adjunct Professor at the Baltic Defence College, Tartu, Estonia from 2007 to 2014. Currently he is a President of the Hungarian Association of Military Science. His publications deal with the Hungarian Defence Policy, NATO, Visegrad Group, and peace support operations. His last edited book titled „NATO Today. The state and tasks of the Alliance (Zrínyi Publishing House, 2021, Budapest)

The 2020 and 2021 Virtual Conferences allowed for live and on-demand content, instant networking and assess to market-leading Industry Sponsor information. However, returning live in 2022 will provide an unparalleled opportunity for networking with peers and colleagues from across the region.
Keynote briefings from senior officers from friendly nations from across the Europe and beyond, proving insights into the latest technological and doctrinal developments with a focus on interoperability with NATO partners.

A unique focus on the key themes of interoperability, survivability, lethality, mobility, modularity, and situational awareness.
BOOK BY 28/02/22
£1299

About SMi Group:
Established since 1993, the SMi Group is a global event-production company that specializes in Business-to-Business Conferences, Workshops, Masterclasses and online Communities. We create and deliver events in the Defence, Security, Energy, Utilities, Finance and Pharmaceutical industries. We pride ourselves on having access to the world’s most forward-thinking opinion leaders and visionaries, allowing us to bring our communities together to Learn, Engage, Share and Network. More information can be found at http://www.smi-online.co.uk