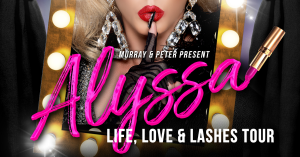 We wanted to take the audience on a legendary theatrical journey – touching every arc of the rainbow that is the life of Alyssa. Her fans will be left both shocked and inspired.”
— Murray Hodgson

DALLAS, TX, UNITED STATES , March 8, 2022 /EINPresswire.com/ — Hailed as the “sickening queen supreme” by The Times, RuPaul’s Drag Race sensation Alyssa Edwards will embark on a cross-country US tour spanning from Los Angeles to New York City – with 26 cities in between. Entitled the Life, Love and Lashes Tour, this one-diva show is a non-stop adrenaline spectacle – pulling back the velvet curtain to reveal Alyssa’s most intimate secrets.

Following her sold out, critically acclaimed stint at the Vaudeville Theatre in London’s historic West End last year, Alyssa promises “longer lashes, bigger wigs and louder tongue pops” in this expanded, reimagined extravaganza launching at the House of Blues in Dallas, Texas on Tuesday, May 10, 2022.

“This is a side of her that you have never seen before,” said show producer Murray Hodgson. “We wanted to take the audience on a legendary theatrical journey – touching every arc of the rainbow that is the life of Alyssa. What she delivers on that stage is pure magic, and her fans will be left both shocked and inspired.”

Slated as a “love letter from Alyssa,” the show chronicles her yellow brick road to fame, laced with intimate anecdotes of a young boy with big dreams to the adventures of a budding superstar, and every glitter-filled moment in-between spanning across her 25-year career.

The 90-min show is a comedic and campy recital – packed with audacious reveals, gag-worthy costume changes and powerhouse performances by the “Dancing Queen” and her troupe of bodacious backup dancers.