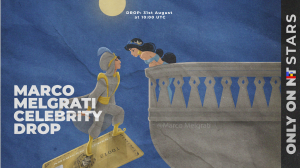 SYDNEY, AUSTRALIA, August 28, 2021 /EINPresswire.com/ — NFT marketplace NFT STARS presents the illustration “The Magic Carpet” by Marco Melgrati, one of the artist’s first works to go viral on the internet. “The Magic Carpet” depicts the medieval love story between Aladdin and Jasmine as if it happened in the present day, where the way to Jasmine’s heart is through the virtues of a golden credit card. The artwork will be auctioned on August 31st at 10:00 UTC.
Illustration as a Means to Expose Social Issues
Marco Melgrati is an illustrator from Italy who built his name and internet following because of his unique illustrations reflecting on modern-day issues. Melgrati covers topics such as the effect of social media on our lives, today’s beauty standards, politics and how money changes a person along with their attitudes. Each social issue is presented in a comical way and yet explores the issue in great depth and from unique perspectives.

The illustrator has worked with popular magazines, newspapers, fashion brands and advertising agencies. His creations have been published in The Washington Times, The Economist and Billboard. At this point in his career, Melgrati is joining the NFT club with the presentation of his famous illustration, “The Magic Carpet”, for auction on NFT STARS.

“The Magic Carpet” is an interpretation of the medieval love story between Aladdin and Jasmine from “The Book of One Thousand and One Nights”. What we believed was true love ends up being a financial transaction where one puts their time and attention to the table and the other buys the table. Melgrati showcases how in modern society, everything has a price tag and the only question is whether you can afford to pay it.

Marco Melgrati created “The Magic Carpet” in 2018. It became one of his first illustrations to go viral. Now, the artwork is being put up for auction on the NFT STARS marketplace, on August 31st at 10:00 UTC.
About NFT STARS
NFT STARS is a new NFT marketplace that provides its users with a unique set of products and services. The marketplace follows a strict selection approach to artists. Every creator featured on the platform is either chosen by the executive board or voted for by the community. Thus, the NFT STARS team is able to provide truly special treatment to the chosen few NFT stars. Artists enjoy Gas-free minting; NFTs are minted at the time of purchase and the buyer covers the costs. The marketplace supports the free flow of ideas and enables artists to mint artwork as a team via the collective NFT ownership feature and share the proceeds from its sale equally. NFT STARS also enables every artist to create an AR room in which they can display their works and host their first show. The AR galleries can be viewed on the screen of a smartphone.