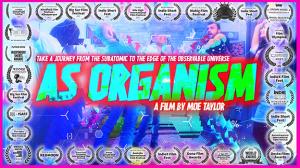 Knowledge is Good is a fast-paced information-dense series of 30 minute episodes about weird science most people never think about but definitely should.

As Organism is a blazingly fast documentary that takes its queues from the original Bill Nye the Science Guy show from the 90s and throws in a wallop of caffeine.”
— Callum Reds/ www.scripttoindie.com

CLEVELAND, UNITED STATES, August 23, 2021 /EINPresswire.com/ — BrainDagger Films is looking to avoid the hypocrisy and and commercialization Hollywood investors bring to the table when funding a film production so they are taking a different route. They just launched a Kickstarter page where everyone can be part of the production and receive fun rewards such as Merch and even a visit with Moe Taylor himself!

They are looking to fund episode two of their award winning series “BrainDagger Films Presents: Knowledge is Good”. The series blends philosophy from the ancient and current world with cutting edge science through interviews, dialogue and narratives to give the viewer more than just an understanding of new scientific facts. It gives them a sense of what the science means to everyday people and how they can use the knowledge on a daily basis to deal with the stresses of modern life. Consider it an intellectual anti-depressant in a scientific film format.

Most important, If BrainDagger can get the funding from Kickstarter they will release the series for free for everyone on Youtube. You can find all the details on their kickstarter page right here:

To understand what the series hopes to accomplish you should watch episode one “AS ORGANISM” on youtube through the link below.

In this episode you join Rachel Sellers and Alan Watts for a journey in scale from the subatomic world to the edge of the cosmos as they open your eyes to the possibilities of the universe as a single organism. Discover the range of patterns that design the world around us and the mathematical properties inherent in the building blocks of everything we know.

With this understanding of the world around us we can learn to comprehend our perceived enemies point of view and hopefully treat our fellow man a little better. There isn’t much hope for society and civilization as we know it if we cant get along. We are in the midst of a global societal collapse and it is important to show films like this so we can possibly slow it down and maybe even stop it before its too late. STOP HATING PEOPLE BEFORE YOU MEET THEM. Please?

The film is free for anyone to watch and make their own conclusions. Below is a partial list of awards and reviews.

Excerpts from these interviews:

“As Organism is a blazingly fast documentary that takes its queues from the original Bill Nye the Science Guy show from the 90s and throws in a wallop of caffeine.”

“If you think a science documentary has to be super boring, think again… this short film is absolute proof of that.”

“If you want a great masterclass of how to edit for interest, As Organism would work wonderfully as a teaching tool but make no mistake, you just may find yourself lost in the film. I’m pretty confident that was the plan all along.”

“It’s loud, and it’s fun, and it also teaches you something.”

“This lower-budget short film has outdone plenty of the big guy productions I’ve seen from a technical standpoint.”

“As for the film in its entirety? Excellent. Very well done.”

“It has no problem keeping you hooked no matter what you believe.”

“As it was stated in the film, “As Organism” could lead to an overload of the mind – but as long as you keep a little of what you’ve seen in the back of your head, your perception of things may forever be altered.”

“There’s nothing basic about this short film – at all.”

“We are barraged with one video image after the other. It’s vibrant, colorful, and relentless.”

“Moe Taylor’s As Organism is a documentary short, shot in a visually over-stimulating MTV style that is hard to pull off and so easy to fail. In Taylor’s case, he found the secret, and it works.”

“There are so many projects out there and that most of them are just retreads of stories, but apparently new takes on concepts are still out there to be found, and that is nice to know.”