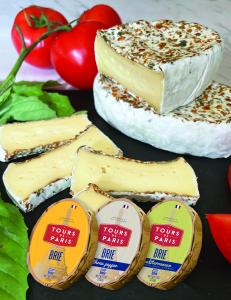 It’s with great pride that we celebrate Henri Hutin’s century of excellence in cheesemaking. While we have a foothold in the past, we’re 100 years ‘young’ – always looking to the future, as Henri did.”
— Christel Vibrac, Export Manager of La Fromagerie Henri Hutin

DIEUE-SUR-MEUSE, MA, FRANCE, May 24, 2022 /EINPresswire.com/ — La Fromagerie Henri Hutin, created in 1922 when young Henri took over the family creamery, is excited to celebrate its one hundred year anniversary as it continues to be a leading French producer and exporter of soft-ripened, pressed soft-ripened, and spreadable fresh specialty cheeses, with brands including Belletoile, Brie Couronne, and Tours de Paris.

Recognized a century later for its traditional craftsmanship, cheesemaking expertise, and ability to meet the market’s changing needs, La Fromagerie Henri Hutin has committed to using only premium milk from pasture-raised cows for its Brie Couronne range of double-crème Bries, while Tours de Paris, known for its foil-wrapped wedges of Brie, is launching an oval format (7-oz) with two exciting flavors – 3 Peppers and Mediterranean – in addition to Plain, accompanied by updated graphics for the brand.

Born at the turn of the 20th century into a family of farmers and farmstead cheesemakers in Meuse, France, it was after World War I – at twenty-two years old – that Henri Hutin quickly expanded the company’s Brie production to meet the demand he created across France’s northeastern region, having stretched his sales territory to the nearby cities of Metz and Nancy and earning his reputation as “master cheesemaker.”

Hutin’s business acumen and know-how, combined with his perseverance – his first factory burned down and the second was destroyed during WWII – allowed his cheese company to continually evolve in its production of soft-ripened cheeses. Maintaining a focus on craftsmanship and quality by using premium fresh milk and cream from cows in the Lorraine Valley, a region known for its agriculture and farmland, Hutin’s signature product, Belletoile, became the first triple-crème Brie exported to the US in 1960.

Monsieur Henri Hutin’s company prospered under his leadership until he retired at the age of seventy-five years old and sold his company in 1978 to another family-owned firm, Hochland Group (Germany). La Fromagerie Henri Hutin has retained its founder’s spirit and today not only maintains its excellent reputation, but continues to expand and progress by developing new products and operating in a more sustainable manner, which includes renovating the production facility in Meuse, France, giving it state-of-the-art status, and committing to incorporating more milk from pasture-raised cows.

While the company’s dairy farmers traditionally keep their herds in pasture, La Fromagerie Henri Hutin has implemented a new grazing program, controlled by an independent test institute, specific to the milk used in the production of its prolific Brie Couronne cheeses. Not only does this program ensure the welfare of the cows, it also improves land use, nutrient and manure management, and soil health, translating into a reduced carbon footprint. Further, it has been shown that pasture-raised cows provide higher quality milk, with an increase in the amount of valuable omega-3 and -6 fatty acids, molecules that our bodies use for energy and building cells.

Finally, the company’s Tours de Paris brand has launched a 7-oz oval format to complement its classic 7-oz foil-wrapped wedge. In addition to Plain, two unique flavors – 3 Peppers and Mediterranean – will be in available in oval shape, with the full line of Tours de Paris products showcasing a new packaging design, still recognizable with its prominent Eiffel Tower.

“It is with great pride that we celebrate La Fromagerie Henri Hutin’s century of excellence in cheesemaking,” begins Christel Vibrac, Export Manager of La Fromagerie Henri Hutin. “While we have a foothold in the past, we consider ourselves one hundred years ‘young’ as we are always looking to the future, just as Henri did. We’re making great strides in our effort to combat climate change, all while continuing to make cheeses that are tastier and more convenient for our customers.”