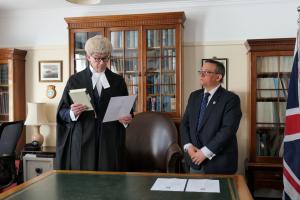 On the 40th anniversary of the Falklands conflict, Judge Malcolm Simmons takes up a new judicial role

LONDON, UNITED KINGDOM, May 24, 2022 /EINPresswire.com/ — In February 2022 Judge Malcolm Simmons was appointed senior judge and Her Majesty’s Coroner of the Falkland Islands, South Georgia, the South Sandwich Islands and the British Antarctic Territory. He is also Acting Supreme Court Judge. In addition to his judicial role, he sits as Chair of the Criminal Justice Committee and Sentencing Guidelines Committee. His is, perhaps, the largest geographical judicial jurisdiction in the world.

Asked about his new role, Judge Simmons said “It is an honour to be appointed to serve the people of these Islands. This is a challenging role with a varied caseload including criminal, family, civil and probate. In addition, I am the coroner for a large geographical area.” In the first few weeks following his appointment, Judge Simmons presided in a serious sexual offences case and an application to remove a child from the jurisdiction. He also dealt with several deaths including a senior officer of a Ukrainian-registered container ship who died en route to Montevideo.

Judge Malcolm Simmons served as an international judge from 2004 to 2017 hearing war crime and serious and organised crime cases. He presided in some of the most complex war crime and serious organised crime cases in Bosnia & Herzegovina and Kosovo during their troubled post-war periods. He served as President of EU International Judges from 2014 to 2017. He is particularly well-known for his judicial reform work and has more that 20 years of experience training judges, prosecutors and lawyers. He has worked in judicial reform projects in Bosnia & Herzegovina, Kosovo, Serbia, Pakistan and Maldives.

For the past few years Judge Simmons has been advising the judiciary in the Maldives, as well as other international roles. However, he had recently expressed a desire to return to the judiciary.

The Falkland Islands are about 300 miles east of the Patagonian Coast of South America and about 750 miles from the northern tip of the Antarctic peninsula. The Islands have an area of 4,700 square miles and comprise two large islands, East Falkland and West Falkland, and 776 smaller islands. It is a self-governing British Overseas Territory with its own courts system. The United Kingdom takes responsibility for their defence and foreign affairs.

The population of Falkland Islands is diverse: as well as Falkland Islanders, many of whom have been here for generations, there are citizens of Brazil, Chile, Zimbabwe, South Africa, Indonesia and Nepal to name but a few. In total, over 50 nationalities now call the Falkland Islands ‘home’. It is not unusual to hear Spanish being spoken in shops and restaurants around the capital, Stanley.

“These islands have an abundance of nature and the scenery is stunning. The beaches remind me of a rugged Cornish coastline and the inland views are reminiscent of Scotland. It is a wonderful place to live and work” said Judge Simmons.

Currently, the only way to reach the Falkland Islands is by cruise ship or the RAF ‘air bridge’ from RAF Brize Norton in Oxfordshire, United Kingdom. It is anticipated that towards the end of the year, regular flight between the islands and Chile and Brazil will resume.