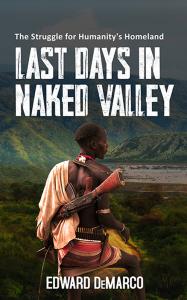 The Omo peoples are a huge favorite on social media …. But most people looking at those pictures and videos have no clue about this incredible struggle going on behind the scenes.”
— Edward DeMarco

ATLANTA, UNITED STATES, August 3, 2022 /EINPresswire.com/ — One of Africa’s most remote valleys is where a drama of world importance is playing out, with the survival of famous Indigenous cultures at stake. The urgency of saving their traditional ways and precious knowledge for future generations amid massive development is in focus August 9 for International Day of the World’s Indigenous Peoples.

“This year, Indigenous Peoples Day reminds us of the major role of women as keepers of traditional knowledge,” says Edward DeMarco, author of Last Days in Naked Valley, his new insider’s memoir of the survival struggle of Africa’s most famous native cultures, in Ethiopia’s Lower Omo Valley. “In the Omo Valley, women from the Hamar, Mursi and other cultures are caught between preserving their way of life and the powerful impact of industrial agriculture planted in their midst.”

DeMarco led America’s engagement in this human rights drama as senior democracy and governance adviser for the U.S. Agency for International Development (USAID) in Ethiopia, from 2012 to 2015. He traveled throughout the valley with representatives from Britain, Germany and other governments, meeting with the Omo communities and Ethiopian government officials to press for informed consent, Indigenous participation in planning, and preservation of their cultures.

His book, filled with a captivating cast of real-life characters, including the Ethiopian Government’s supremo in the valley, explores the stunning scale of the project, which took years to come into view for the Omo’s iconic pastoralists.

“The Omo peoples are a huge favorite on social media for their astounding body art and rituals, such as the famous clay lip-plates of Mursi women,” DeMarco says. “But most people looking at those pictures and videos have no clue about this incredible struggle going on behind the scenes.”

Vital to the story is the water of the Omo River, which tumbles from the Ethiopian highlands. Along the way the river is tamed by the Gilgel Gibe III dam, Africa’s tallest, and a major source of Ethiopia’s electricity. Eventually the Omo emerges into a great basin, where it irrigates one of the world’s biggest sugarcane plantations, covering 250,000 acres (100,000 hectares) along with sugar factories and huge workforces. It is Ethiopia’s biggest-ever agricultural project.

“So much attention has focused on the disputed Grand Ethiopian Renaissance Dam or GERD on the Nile River in northern Ethiopia, while this great drama is playing out in the Omo Valley in the south, with international importance for Indigenous land rights,” DeMarco says.

In the Omo Valley as in other traditional lands around the world, the urgency of balancing economic development and cultural survival is only growing. As the United Nations noted in The State of the World’s Indigenous Peoples: Rights to Lands, Territories and Resources (2021), a substantial portion of the world’s remaining minerals, fossil fuels and forests – along with choice farmland – is found on traditional lands.

“Preserving Indigenous knowledge isn’t just the right thing to do,” DeMarco says. “It’s super important for ensuring that we can benefit from thousands of years of wisdom about managing lands and water and coping with climate shocks. And time is running out to save this knowledge.”

Edward DeMarco is a writer and consultant on African affairs. He was an award-winning democracy and governance adviser for USAID in Ethiopia and Zambia and formerly an international politics editor based in Washington.

For a free preview of Last Days in Naked Valley, please visit the author’s website: www.edemarco.com/publications. To arrange an interview with the author on Indigenous rights issues, Ethiopia’s Lower Omo Valley or international development, email him at: ethiopiabook@edemarco.com