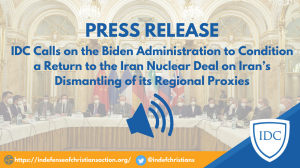 IDC calls on the Biden Administration to strictly condition the Joint Comprehensive Plan of Action (JCPOA) on Iran’s dismantling of its regional proxies.

WASHINGTON, DISTRICT OF COLUMBIA, UNITED STATES, February 2, 2022 /EINPresswire.com/ — In Defense of Christians (IDC) calls on the Biden Administration to strictly condition a U.S. return to the Joint Comprehensive Plan of Action (JCPOA) on Iran’s dismantling of its regional proxies.

Latest reporting indicates that a return to the JCPOA, commonly known as the Iran Nuclear Deal, may be on the near horizon. The JCPOA was an agreement reached in 2015 by the five permanent members of the UN Security Council and Iran. The U.S. subsequently withdrew from the JCPOA in 2018.

The JCPOA’s primary goal is to prevent or delay Iran’s development of a nuclear weapon. However, the threat posed by Iranian terrorist proxies to regional stability should be part of the negotiations. That threat endangers the region’s remaining Christians, among others.

Iran, through Hezbollah, continues to destabilize Lebanon, the last bastion of religious pluralism in the Arab world. Iran-backed militias continue to inhibit Christian survivors of the ISIS genocide from returning to their ancestral homes in the Nineveh Plain. The Houthis, supported by Iran, threaten vulnerable religious communities in Yemen. Finally, Iran’s proxy militias continue to threaten the lives of U.S. servicemembers throughout the region.

Iran’s proxy forces are under the direct command and control of the Islamic Revolutionary Guard Corps (IRGC), designated by the U.S. as a Foreign Terrorist Organization (FTO). As such, the Biden Administration must make the disarmament and dismantling of Iran’s malign proxies a necessary condition to any future engagement with Iran, including a return to the JCPOA.

“A foreign policy that strikes at the foundation of Iran’s terror franchise is necessary in preserving American national security interests in the Middle East,” said IDC President Tonia Khouri. “Such policy will also protect the region’s religious minority communities from human rights violations by the radical, theocratic and expansionist regime,” Khouri continued.