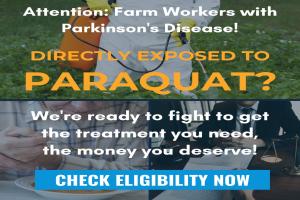 Fahari Law can help you claim maximum compensation after developing an illness due to Paraquat exposure. 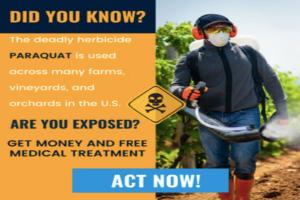 People most at-risk for Paraquat poisoning are farmers, landscapers, and agricultural workers.

Farahi Law Firm launches Paraquat campaign & free consultations for those who developed Parkinson’s and other neurological diseases due to Paraquat exposure.

This Paraquat campaign provides legal help to every person who has been exposed to Paraquat so they get the money they need for treatment and lost income, & to improve their overall quality of life”
— Atty. Justin Farahi

LOS ANGELES, CALIFORNIA, UNITED STATES, December 10, 2021 /EINPresswire.com/ — Farahi Law Firm APC, a personal injury law firm with several offices in California and one of the top 100 law firms in the United States, is launching an awareness campaign to benefit people who have been diagnosed with Parkinson’s disease and other serious health problems due to exposure to Paraquat.

Many studies have shown that Paraquat is highly toxic and can lead to permanent organ damage and disability, including Parkinson’s Disease. According to the Centers for Disease Control and Prevention, the long-term consequences of Paraquat exposure can result in damage to vital organ systems, especially the lungs, heart, and kidneys. In cases of prolonged or large amounts of Paraquat ingested over time, patients are not expected to live long without medical treatment.

“Our goal is to help people who have been exposed to Paraquat and have fallen ill because of it to get the medical treatment they need and the money they deserve. Many of those who have been exposed to this deadly weed killer hesitate to seek help and file a claim because they are intimidated by the financial repercussions of doing so. We have lawyers, doctors, and case managers on standby 24/7 to assist,” says Atty. Justin Farahi, lead counsel for Farahi Law Firm and 2021 Lawyer of the Year*

“This campaign is intended to provide legal assistance to every person who has been exposed to Paraquat so they get the money they need for treatment, lost income, and to improve their overall quality of life,” adds Atty. Farahi.

Paraquat is not illegal in the U.S., and users are only given caution about its use. Current government-issued warnings about Paraquat are all placing the burden of protection on the population’s shoulders: where humans are advised to be careful about using this toxic substance instead of totally prohibiting its use.

Because of its commercial indication, it is the people who work in these settings who are the most at-risk for Paraquat poisoning or developing debilitating diseases from prolonged exposure. Particularly exposed are those who mix, load, and apply paraquat, as well as those who live in or near areas where this chemical is being applied.

Persons who are most at-risk for Paraquat poisoning are:

– Farmers, agricultural workers, landscapers
– Anybody who works with commercial-grade pesticides containing Paraquat
– Residents of rural areas located near farmlands that use Paraquat

“When you have been diagnosed with Parkinson’s Disease due to exposure to Paraquat, you might not know that you can assert your right to get medical treatment and claim monetary compensation. It is essential that you file a Paraquat claim immediately. Farahi Law Firm has a dedicated team of legal professionals, doctors, and case managers who can help you through the entire process, so you only need to think about recovering and getting better,” Atty. Farahi notes.

Those who have developed Parkinson’s Disease due to Paraquat exposure should immediately call Farahi Law Firm for a free case review. There are absolutely no fees for a consultation, and the firm will not charge anything unless you win. The Paraquat lawyers at Farahi Law Firm can help you through the entire process, so you only need to think about recovering and getting better.

Get a free case review now at (844) 824-2955 or visit www.paraclaim.com to learn more about Paraquat poisoning and how you might be affected. We are available 24/7 to help you.

Farahi Law Firm, APC
Justin P. Farahi is an award-winning personal injury lawyer in California. Since the foundation of Farahi Law Firm, APC, he has focused on helping the Californian community by allowing the less fortunate to access quality medical treatment and the best legal representation after an accident. The American Law Institute recognizes him as one of the Top 40 under 40 Lawyers in America. He was also awarded as one of the Top 100 Lawyers in the USA, as a Super Lawyer Rising Star, and 2021 Lawyer of the Year by the American Institute of Legal Professionals. He speaks English, Spanish, and Farsi.