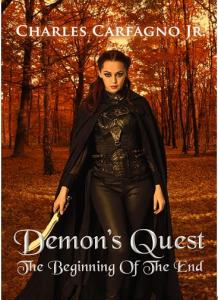 A Demon’s Quest – The Beginning of the End. (Volume 1) By Charles Carfagno Jr

DEVON, PENNSYLVANIA, UNITED STATES, February 28, 2022 /EINPresswire.com/ — Reading is an adventure that never ends. We want to help readers find adventurous stories and exciting tales filled with curiosity, thrill, suspense, sensation and enjoyment. In a world, where monsters are running amok, demons are emerging from the underworld to stake their claim on humanity. Battle lines are hastily drawn, ensnaring friends and foes in a fight for their lives. Enjoy every moment and every scene since the author has kept the action coming on every page.

Award-winning author, Charles Carfagno Jr has released his epic fantasy adventure known as A Demon’s Quest – The Beginning of the End. (Volume 1) The book has been published on Amazon. The volume 1 has enthrall the fantasy world with a bang. Volume 1 has captivated the readers from the first page. This extraordinary book by Charles Carfagno Jr. is full of fast action, fantastic writing, lively dialogues, and adventurous scenes. The author writes compelling scenes and actions using his creative imagination. The amazing action takes us into an original fantasy world. Once the readers begin reading the book, they feel mesmerized by the fantasy. They feel as if they have become the invisible witness who sees everything that is going in front of them, every action and scene appears to be real.

The story begins with Gilex setting the groundwork for his plans to awaken the Blood Knights and use them for the good of mankind. The next section introduces Repan, the self-proclaimed Lord of the Mind. With his powers of illusion and magic, he plans on ruling the region. Then the story switches back and forth between two friends, Torhan and Jacko. Jacko is a monk from the order of the Open Palm. When Jacko’s return from his promotion contest is delayed, Torhan is manipulated into performing an errand for the mysterious Lord Grappin. Armed with an enchanted sword and dagger, he gets caught up in a whirlwind ride of adventures befitting the brand of Dungeon and Dragons.

The story of Volume 1 of the book revolves around a group of adventures who wish to seek the wealthy reward and a payback to Togan who has sided with demons. Their mission is to defeat Togan and get their hands on huge wealth. One of the group members has a different plan. He wants to awaken the legendary Blood Knights and with their help rule the world. He has the book of ancient chants, the Book of Blood. Whoever hears it, recites it and it changes their mind.

The story is set in a fantastic world of mythical creatures such as evil villains, and crafty humans. The evil characters strike as toxic and act mercilessly to enslave humans. However, a battle cry of freedom stands in their way, as courage, honesty and loyalty will not easily be outdone. An array of characters led by Blood Knights, Monks of the Order of Open Palm and the Lord of the Mind are engaged in different battles. The narrative illustrates the story of a young boy who has the weapon that is so remarkable that no enemy can defeat it. He got it by accident, but using this weapon made him involve in the crime he didn’t commit. His journey in the book is portrayed as dangerous and destructive but he is brave, resourceful, and skilled with a blade and fights to prove his innocence. All the characters are interwoven with fast-paced storytelling and the epic journey of Torhan. Great suspense and action with wonderful world-building have added thrill, suspense, magic, and excitement to the story. The plot is conceived with depth, the readers have been absorbed by epic battles and incredible creatures fighting furiously.

Charles Carfagno Jr is excited to share his writing with the world and would love to interact with other authors and the readers. He hopes that his epic fantasy will intellectually engage the readers who get engrossed in the story, trying to figure out the answer to a puzzle. The book will spark children’s curiosity, imagination, and creativity. The author has done a wonderful job creating an original fantasy tale and is able to paint the vision of the adventure in the reader’s head in just the right place. The fight scenes are fast and engaging and absorbing for the readers.

So, get ready to be relocated into a magic world of extraordinary characters and events. Demon’s Quest is packed with magic, swordplay, monsters and much more. A great read for all fantasy fans, both young and adult will feel excited to meet Game of Thrones and Kung Fu Theater and spellbinding tale of adventure and magic.

About the Author
Charles Carfagno Jr. is a native of Pennsylvania. He’s been writing since 2003 and currently writes on nights and weekends, in addition to his successful day job in the IT field. He is also a practitioner of Western Martial Artists for over eight years and his skills in the art, have allowed him to create so many memorable fight scenes throughout the series.

If you need more information about the book, email at charles.carfagno@gmail.com