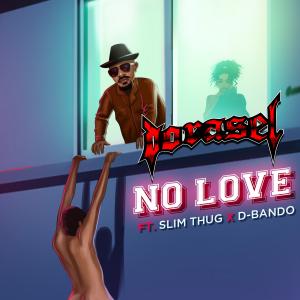 Dorasel delivers a message of strength and hope with his new single, “NO LOVE.”

Raw and unguarded, “NO LOVE” draws inspiration from Dorasel’s devotion and dedication to a past life-altering relationship. Believing in the reciprocation of love between two people, he trusted his now ex-wife, ultimately putting his life on hold to support her ambitions. He sacrificed his career, freedom, and dreams to ensure his wife’s desires came to fruition. However, shortly after she passed the bar exam and joined a large law firm, her vows and promises failed, and she ghosted him. This experience provided the influence and artistry behind the track “NO LOVE.” As stated by him, “I deserve better!”

Strategically released a couple of weeks after the Valentine’s Day holiday, Dorasel states, “The I love you lie most of us are fed throughout our lives is served on larger plates during the Valentine’s Day holiday. But unfortunately, the day is followed by heartache, and many need inspiration.” “NO LOVE” is not about Valentine’s Day; instead, it is a song meant to build a connection of trust, support, and love between Dorasel and his fans. He plans to release a new single on the last Friday of every month in hopes of building a genuine and lasting bond with listeners.

Recorded at Hoover Studios in Houston, Texas, and arranged and engineered by James Hoover, best known for his work with Rick Ross, Destiny’s Child, Scarface, Lionel Richie, Baby Bash, and Chamillionaire, “NO LOVE” is now available on Spotify and other music platforms.

About Dorasel
Born Eric Vaughn, Dorasel is a Texas-based Hip-Hop recording artist who began his career in prison. Through his first manager, Kenneth’ Snag’ Forker, Dorasel got the attention of J. Prince, who immediately assigned him to his Houston-based Rap-A-Lot Records in 1998, just two weeks after his release. Signing to J. Prince’s label caused a 360-degree life change, allowing him to build financial stability for his family. After serving a lengthy prison sentence and going back again for reasons other than guilt, losing a record deal, facing mental health issues, a failed marriage, and no family support, he still managed to earn a bachelor’s degree while piecing together a massive collection of new songs. His music delivers compelling stories about fake love, real hate, pain, passion, and determination with openness, will, and strength. He strives to connect emotionally to others through his lyrics and hypnotic sounds. He attributes much of his drive to his late father, who kept him motivated and inspired no matter the obstacles. When he is not making music, he uses his spare time to set up free private tutoring for struggling middle and high school students in Houston’s 5th Ward. Dorasel states, “For me helping others through music, time, and education is a worthy ideal and has become my only mission and definition of success.”