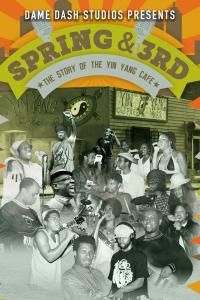 Dame Dash’s latest documentary explores the makings of of the neo-soul movement.

It’s funny how the universe works… to have one of the Architects of Opulence, if you will, champion a film about that juxtaposition has to be fate.”
— Malik Salaam

ATLANTA, GA, UNITED STATES, March 1, 2022 /EINPresswire.com/ — Dame Dash, the iconic music exec and serial entrepreneur, is always looking for new opportunities to exploit his skill set. Though the Paid in Full producer is best known for urban crime narratives like State Property (1 &2) and Honor Up, Dame Dash Studios and Homestead Entertainment has recently partnered with up and coming, African American director , Malik Salaam, to distribute the filmmakers latest documentary entitled Spring & 3rd: The Story of the Yin Yang Cafe.

In an ironic contrast to Dame’s industry ties to the Bling Era of Hip Hop, the documentary highlights the Neo-Soul, Artsy-Types in Atlanta, who began to blossom during that same time period.

“It’s funny how the universe works.” says Salaam, an Atlanta native. “When we started this project we didn’t realize how much the culture of the nineties would inform the fringe culture inside this tiny cafe. So to have one of the Architects of Opulence, if you will, champion a film about that juxtaposition has to be fate.”

Spring & 3rd premiered last summer at the Bronze Lens Film Festival to rave reviews and comparisons to the Oscar nominated documentary Summer of Soul. The documentary stars David Banner, Bone Crusher, Anthony David, Joi Gilliam, a host of other artistic heavyweights, and is narrated by Big Rube of the Dungeon Family. Spring & 3rd: The Story of the Yin Yang Cafe will begin streaming on Tubi TV in March 2022.