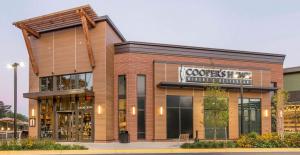 The privately-owned restaurant group has been honored by readers of USA TODAY’s 2020 10Best with an award of #1 Best Winery Restaurant. The program is designed to recognize North America’s best wineries that also operate restaurants where chefs and sommeliers work together to create a perfect pairing menu.

About Cooper’s Hawk Winery & Restaurants:
Founded in 2005 by CEO Tim McEnery, Cooper’s Hawk is built on the belief that food and wine hold the power to forge lasting connections and create memorable moments that enrich lives. The concept combines a modern casual restaurant, Napa-style tasting room, and artisanal retail market to create an entirely new hospitality experience. The company, home to half a million wine club members, has achieved over 20 percent year-over-year growth and operates nearly 50 locations in 10 states. The brand has been recognized as an industry leader and fast-growth company by Nation’s Restaurant News, Consumer Reports, Crain’s Chicago Business, and Wine Business Monthly. Cooper’s Hawk has won over 600 awards for its wine and has been named the Official Wine of the Screen Actors Guild Awards® since 2017.