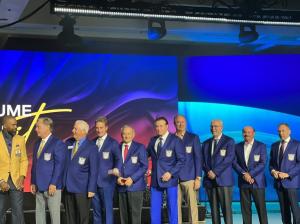 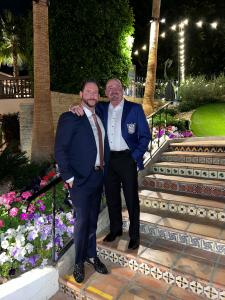 Since 2017, Ford annually inducts five members into this Hall of Fame, selecting high performing dealers who show tremendous community leadership and pride in helping customers discover their next Ford model.

The Route to Success

Benny Sr.’s route to success was not easy. “I was born in Spain and lived there until I was about 4 years old,” he began.

When the Spanish Civil War began to affect his family, “my parents decided to move us to Cuba,” Robles Sr. continued. When he turned 14, the family began to feel as if they had jumped from a frying pan into the fire:

“My parents thought Castro was going to get overthrown, which would cause a revolution, so they sent me with a group of children, all without their parents, to a refugee camp in Miami.”

After one year in the camp, a foster family in Michigan welcomed him into their family. When he was a senior in high school, his parents finally joined him in the States, settling in Tampa. Robles Sr. joined his parents there, going to college at the University of South Florida.

Both Smith and Robles Sr. quickly found that they shared that philosophy, and so Robles Sr. joined the Bartow Ford family in 1977, and rose through the ranks, becoming one of the owners in 1985 – eventually becoming the majority owner as Smith’s health began to fail.

Today, Robles Sr’s son, Benny Jr. is the majority owner and President of Bartow Ford.
“I am so proud that my father was honored with this award,” Robles Jr. said. “It is not only representative of the lifetime of devotion that my father has given to this company, but also of the teamwork and dedication of everyone in the Bartow Ford family.”

If you would like more information about this topic or to schedule an interview with Benny Robles Jr., please contact Amy Sumerlin at 800-533-0425 or email amysu@bartowford.