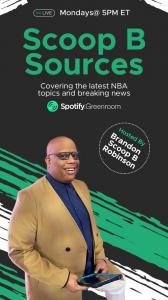 Spotify Greenroom has tons of great things I admire in the audio space. The success of my podcast, Scoop B Radio has flourished on Spotify, I’m excited to be tapped into creating something new.”
— Brandon “Scoop B” Robinson

NEW YORK CITY, NEW YORK, UNITED STATES, February 7, 2022 /EINPresswire.com/ — Brandon “Scoop B” Robinson joins Spotify as a host on new show “Scoop B Sources” every Monday at 5 PM ET through the Spotify Greenroom live audio app. Spotify Greenroom is a new social app from Spotify that lets you host and participate in live discussions. Through virtual rooms you can listen and talk about the things you love with artists and fans with similar interests.

While Spotify and Scoop B have entered into a new partnership, Robinson will continue in his role with Bally Sports where he serves as their National NBA Insider. In the past year, he’s also stepped into the sports betting space with Bovada where he’s hosted Instagram Live Shows with 2-time Super Bowl Champion Bryant McFadden of CBS Sports and Sirius-XM host and adult film star Lisa Ann. Also through Bovada, Scoop B has blended hip hop and hoops interviews with notables like Jim Jones, Vinnie Brown from Grammy award winning group Naughty By Nature and radio legend Ed Lover.

According to Scoop B: “Spotify Greenroom has tons of great things that I admire in the audio space. I’ve seen the success of my podcast, Scoop B Radio flourish on the Spotify platform and I’m excited to be tapped in to create something new in this media space. I have a great team and solid leadership that makes this transition FUN! ” Download the Spotify Greenroom app from Apple or Google Play. If you have a Spotify account you can log in to Greenroom using your Spotify login details.

About Brandon “Scoop B” Robinson – ​Brandon “Scoop B” Robinson has been a longtime radio host, columnist and television contributor for CBS Sports Radio, MSG Networks, Heavy.com, NBC Sports, The Source Magazine, RESPECT Magazine and Basketball Society. His podcast Scoop B Radio garners 5 million streams annually and has had guests like Pete Sampras, Mark Cuban, Shaquille O’Neal, DJ Khaled, Don Lemon, and the voice behind Apple’s Siri technology. He began his career in the industry at 12 years old with the then-New Jersey Nets hosting a kids radio show on AM New York radio called Nets Slammin’ Planet. He grew up in both northern New Jersey and New York City and began his career working at his family’s shoe stores “The Athlete’s Foot” and “Men’s Walkers” in Harlem, New York where he crossed paths with names like Dizzy Gillespie and NBA Hall of Famers Dominique Wilkins and Hakeem Olajuwon. He’s elevated his standing and credibility throughout the industry and even made appearances in the NBA 2K franchise.