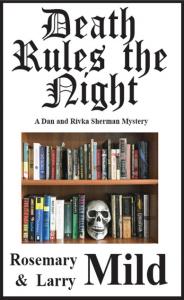 Death Rules the Night by Rosemary and Larry Mild

Death Rules the Night by Rosemary and Larry Mild Slated for Release on September 7, 2021

HONOLULU, HAWAII, US, August 19, 2021 /EINPresswire.com/ — Acclaimed suspense-writing duo, husband-and-wife mystery novelists Rosemary and Larry Mild, will unveil a new mystery this September with the release of Death Rules the Night. Slated for simultaneous publication in trade paper (ISBN 978-0-9905472-6-6, 272 pages, $14.95) and eBook editions, Death Rules the Night will be available wherever fine books are sold on September 7, 2021.

In Death Rules the Night, the fourth Dan and Rivka Sherman mystery, Rosemary and Larry Mild deliver a smart, suspenseful tale that will keep readers spellbound.

About Death Rules the Night: Reluctant sleuths Dan and Rivka yearn for a tranquil life as owners of The Olde Victorian Bookstore in Annapolis, Maryland. When copies of a tell-all book on the prominent Atkins family go missing from the bookstore, from all the local libraries, and even from the author’s bookshelves, Dan wants to know why. But the price of “why” brings threats, stalking, break-ins—and a brutal murder. He and Rivka fear for their lives.

The Atkins family secrets are weaving a sinister web. Tom Dwyer, a retired truck driver, is ready to confess to a crime that he and Frank Mulhaney, another driver, committed twenty years ago. Frank plots revenge on Tom. Bookstore clerk Ivy hears ugly gossip aimed at derailing her wedding. Will the family secrets finally see the light of day? And will the killer ever be caught?

Death Rules the Night is a tightly woven, cleverly plotted tale with an irresistible cast of characters—including Lord Byron, the wily bookstore cat who springs his own surprise.

Rosemary and Larry have published award-winning novels, short stories, and essays. They coauthored the popular Paco and Molly Mystery Series; Hawaii adventure/thrillers Cry Ohana and Honolulu Heat; and three volumes of short stories, many of which appear in anthologies. After forty-plus years in Maryland, the Milds currently make their home in Honolulu, where they cherish time with their daughter, son-in-law, and grandchildren.

Members of the news media requesting more information about Death Rules the Night
or the authors are kindly asked to contact Maryglenn M. Warnock at: maryglenn@maryglenn.com