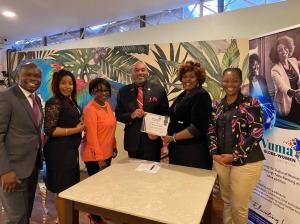 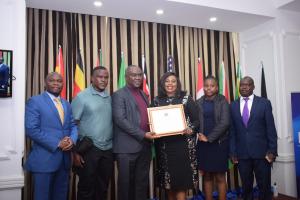 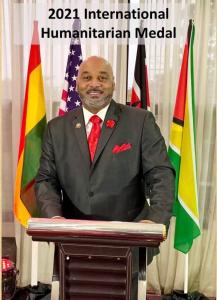 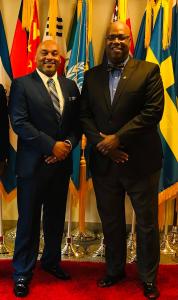 The Leadership of VUMA Globe-Women Network have Appointed World Civility Ambassador Dr. Ruben West as its Global Ambassador and Spokesmen

I am pleased to work alongside the honorable women of VGWN. I look forward to bringing my experiences, influence and contacts to the VUMA Globe-Women Network. We will do great things together.”
— Dr. Ruben West

NAIROBI CITY, KENYA, September 10, 2021 /EINPresswire.com/ — After seeing and hearing Dr. Ruben West of the United States in action during the Women Positioned for Excellence event held in Nairobi, Kenya at the Weston Hotel, the VGWN leadership started exploring the possibilities for his appointment as their Global Ambassador.

The event honored 100 women (40 in attendance and 60 viewing online) that were graduating from the European Business School’s online training program. Dr. West addressed the graduates as well as the audience members saying that “if women can give birth to presidents, prime ministers and business leaders then they can become presidents, prime ministers and business leaders”.

Before the conclusion of the event, Dr. Ruben West presented Maria Nato with the I Change Nations Susan Maxine Gibson Global Messenger of Hope Award. Maria was awarded for her commitment and dedication to elevating women throughout Kenya.

I Change Nations is a Culture of Honor System; the organization is committed to bringing back the lost art of honor by building a Culture of Honor that recognizes individuals throughout the world who have exemplified extraordinary humanitarian efforts to effectively change nations.

According to the founder of I Change Nation (ICN) Dr. Clyde Rivers, ICN honors people and organizations that believe every life is valuable and is created to bring a contribution to the world. ICN is the largest “building cultures of honor” network in the world.

In 2019 Dr. Ruben West was appointed Special Envoy for I Change Nations by the organization’s founder. Dr. West carries out his mandate by identifying deserving individuals and submitting them to the organization for award consideration.

“I am pleased to work alongside the honorable women of VGWN.” Says Dr. Ruben West
He went on to say, “I look forward to bringing my experiences, influence and contacts to the VUMA Globe-Women Network. We will do great things together”.

Dr. West has created international influence and received global recognition for his work. Recently Dr. Ruben West was awarded the International Humanitarian Medal by Amb. AbdullGhani Yahya Al-ebarh the President of the United Nations Social Council and nominee for the 2021 Nobel Peace Prize. Dr. West has been appointed Word Civility Ambassador by ICN and Universal Peace Ambassador by the Universal Peace Federation. In 2019 he received the Sydney Allicock (Vice President of Guyana) Global Humanitarian Award and was recognized as the United States Civility Icon of the Year at the World Civility Day celebration in Gary, Indiana. In 2018 Dr. West received the Girma Wolde Giorgis (Former President of Ethiopia) Presidential Award for being a Human Conservationist which is defined as bringing out the best in others. Dr. Ruben West received the President’s Lifetime Achievement Award from President Barack Obama for his volunteer service of over 4,000 hours to the citizens of the United States of America.

Dr. West’s official appointment as VGWN Global Ambassador and Spokesperson was held at a private event August 5th, 2021 with select VGWN leaders. At this same event Dr. Juma Nashon was appoint Special Advisor to the organization.

Vuma Globe-Women Network (VGWN) is dedicated to advancing the status of women in Africa through empowerment. It was established with the objective to address major gaps i.e. poverty, gender equality and barriers that obstruct women from realizing positions of leadership and influence to take on such roles. VGWN offers table banking, training and networking opportunities to enable women build themselves sustainable livelihoods. They value innovation and inclusion, and are committed to nurturing partnerships which identify with their vision and mission.