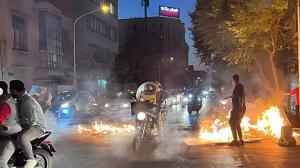 Iran’s cities respond to Khamenei with even more protests. 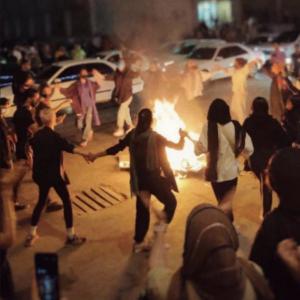 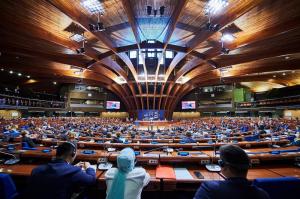 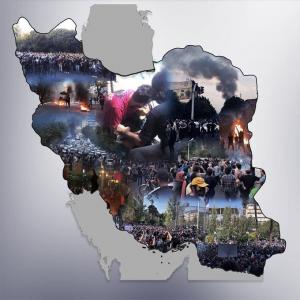 Iran’s nationwide uprising continues on Saturday, marking the 30th day of the relentless protests, despite the regime’s heavy crackdown on people from all walks of life.

Protesters in at least 190 cities throughout Iran’s 31 provinces have taken to the streets for 30 days now seeking to overthrow the mullahs’ regime.

European Council Members to Support Free Iran: “it is time to recognize the right of the Iranian people to defend themselves and to overthrow this regime and to establish a free and democratic Iran”
— MEPs

PARIS, VALDOIS, FRANCE, October 15, 2022 /EINPresswire.com/ — Iran’s nationwide uprising continues on Saturday, marking the 30th day of the relentless protests, despite the regime’s heavy crackdown on people from all walks of life. The restive city of Sanandaj, the capital of Kurdistan Province, and Saqqez, the hometown of Mahsa Amini, and Mahabad saw many of its merchant’s close shop and continue their general strike against the mullahs’ regime. Strikes were also reported in the cities of Bukan and Ilam.

Protests in Iran have to this day expanded to 190 cities. Over 400 people have been killed and more than 20,000 are arrested by the regime’s forces, according to sources of the Iranian opposition People’s Mojahedin Organization of Iran (PMOI/MEK). The names of 206 killed protesters have been published by the PMOI/MEK.

In Marivan, protesters blocked roads with fire to prevent the movement of security forces. In Rasht, the students of the Islamic Azad University took to the streets to hold protest rallies.

Reports also came in from universities in Tehran. The students of Shariati Technical College held a protest rally and chanted “Death to [Khamenei] for these years of crimes!” At Tehran University, the students were chanting, “Students are in prison! Security agents are in university!” and “Freedom! Freedom! Freedom!” At Soore University, students held a protest rally, painting their palms red and shouting “Jailed students must be released!” And the students of the University of Science and Technology expressed their solidarity with protests across the country by chanting, “From Kurdistan to Zahedan, you are the pride of Iran!”

Students in Rasht also held protest rallies and called on their fellow compatriots to support them.

Protests continued in Arak throughout the day and more videos coming in show protesters confronting security forces and not backing down in face of the regime’s repression. Protest rallies also took place in the cities of Alborz province. In Golshahr, there was a heavy presence of security forces to prevent protests. In Gohardasht, security forces opened fire on protesters. Videos show security forces violently beating and arresting protesters.

Protests also took place in Mashhad and Shahin Shahr, where people chanted, “Death to Khamenei!” as they held their demonstrations.

Many cities checkered across the country were also scenes of anti-regime protests on Friday, with several areas reporting clashes between locals and the regime’s security forces well into the night. Protesters throughout Iran are chanting slogans against the regime in its entirety, specifically Khamenei.

Authorities continue to impose a heavy internet blackout and Iranian activists are resorting to a variety of measures to send footage of their protests and demonstrations.

Protests resumed in Zahedan on Friday. These protests came two weeks after the “Bloody Friday of Zahedan” on September 30, where security forces opened fire on peaceful protesters and killed more than 100 people, including more than a dozen children. Protesters marched in the streets of Zahedan, chanting slogans against the regime and the Basij, the paramilitary force that is tasked with suppressing protests.

Iranian opposition NCRI President-elect Maryam Rajavi hailed the brave people of Zahedan in the relentless pursuit of their rights. “I salute the people of Zahedan and my fellow Baluch compatriots, who fulfilled their pledge to the victims of Sept. 30 by marching and chanting, ‘Death to the dictator!’ and ‘Death to Basij.’ Your determination will crush the dictatorship,” she tweeted.

Protests were also held in Arak, Markazi province, the people held a large demonstration and chanted slogans against the regime, including, “All these years of crimes! Death to the mullahs’ regime!” In Marivan, Kurdistan province, the people resumed their nightly protests and lit fires in the streets to prevent the movement of security forces.

These protests began following the death of Mahsa Amini. Mahsa (Zhina) Amini, a 22-year-old woman from the city of Saqqez in Kurdistan Province, western Iran, who traveled to Tehran with her family, was arrested on Tuesday, September 13, at the entry of Haqqani Highway by the regime’s so-called “Guidance Patrol” and transferred to the “Moral Security” agency.

She was brutally beaten by the morality police and died of her wounds in a Tehran hospital on September 16. The event triggered protests that quickly spread across Iran and rekindled the people’s desire to overthrow the regime.

Amnesty International posted a video on its Twitter page on Friday highlighting the fact that at least 23 children have been killed by the regime’s security forces in Iran.

On the eve of the meeting of the Council of Ministers on 17 October 2022, in Luxembourg, which will be discussing the EU response to the suppression of current protests in Iran, a declaration signed by more than 170 members of the European Parliament from different political groups was sent to the president of the Council of Ministers and all foreign ministers of the Members States. The declaration calls for support for the Iranian people and states “it is time to recognize the right of the Iranian people to defend themselves and to overthrow this regime and to establish a free and democratic Iran.” It also calls on the EU Member States to make any relation with Iran contingent on ending the suppression and freeing all those arrested.

The declaration reads as follows:

Since mid-September, protests and anti-regime uprisings have spread all over Iran. The protests by women and youth have so far expanded to more than 170 cities in all 31 provinces. Demonstrations are taking place in 45 major universities. The protesters, chanting the rallying cry of “Death to Khamenei,” seek to overthrow the unelected
religious dictatorship. The repressive forces fire tear gas and live ammunition at the protesters.

The new round of uprisings was sparked when Mahsa Amini, a 22-year-old woman from Iran’s Kurdistan province, was arrested in Tehran under the pretext of mal-veiling and was murdered as a result of police beatings. As of October 1, at least 400 demonstrators have been killed and countless others have been injured, and over 20,000 arrested. By disrupting and disconnecting the Internet in large parts of Iran, the regime is trying to prevent the transmission and dissemination of news and images of protests, the true dimensions of the uprising, and finally revelations regarding the scope of its massacre and suppression. The international community must guarantee free access to the Internet for the people of Iran.

Resistance Units and the organized opposition are taking serious risks to play a vital role in organizing and sustaining these protests while putting up a resistance front against repression.

Over the last 40 years, executions and repression have been carried out by Iran’s current leaders, such as Ali Khamenei and the regime’s current President, Ebrahim Raisi. Amnesty International has repeatedly called for the prosecution of Raisi for his role in the massacre of political prisoners in 1988. In that year, 30,000 political prisoners, 90% of whom were from the PMOI/MEK, were executed in accordance with Khomeini’s fatwa. During the uprising of the Iranian people in November 2019, more than 1500 demonstrators were killed by the Islamic Revolutionary Guard Corps (IRGC).

The prospect of change in Iran has never been this accessible. It is time to recognize the right of the Iranian people to defend themselves and overthrow this regime and establish a free and democratic Iran.

In view of the above facts, we, the undersigned, issue the following call to the European Union, HR/VP, United Nations, and, its member states:

1- Strongly condemn the killing of demonstrators in Iran and take urgent measures to stop this repression. The dossier of this regime’s crimes must be referred to the United Nations Security Council and those responsible for committing such crimes must be brought to justice;

2- Make any relations with Iran contingent upon the halt of executions, domestic repression, and a crackdown on protests and dissent and a release of all those arrested during the recent uprising;

3- Help the Iranian people have free and unhindered access to the internet in response to the regime’s internet shutdown and blocking of social media platforms;

4- Impose punitive measures on those responsible for the latest deadly crackdown and regime leaders like Raisi in line with EU’s Magnitsky-style laws as required by the European Parliament;

5- Recognize the Iranian people’s democratic aspirations, their organized Resistance movement, and their right to establish a free, democratic, and secular Iran.