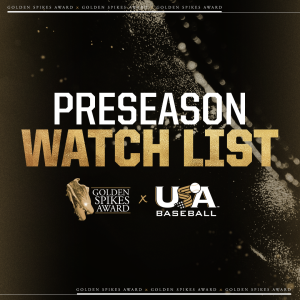 The list features 55 of the nation’s top amateur baseball players.

The 2022 preseason watch list features 55 of the nation’s top amateur players from high school and college baseball. The Golden Spikes Award Advisory Board will maintain a rolling list of players, allowing athletes to play themselves into consideration for the award throughout the season.

“We could not be more excited to kick off the amateur baseball season with the announcement of the fifty-five-player Golden Spikes Award preseason watch list,” said Paul Seiler, Executive Director/CEO of USA Baseball. “The athletes on this year’s initial watch list represent a tremendous amount of talent and character. We are looking forward to watching their journeys unfold during what is sure to be one of the most thrilling and competitive seasons of amateur baseball to date.”

The 2022 Golden Spikes Award preseason watch list features six athletes that will look to become just the third player from a non-NCAA Division I school to win the award, following in the footsteps of Alex Fernandez (1990) and Bryce Harper (2010). Cam Collier (Chipola) and Haydn McGeary (Colorado Mesa) are representing the National Junior College Athletic Association and NCAA Division II, respectively, in 2022.

LSU leads the list of schools represented with three players on the 2022 list, followed closely by Arizona State, Arkansas, California, Florida, Ole Miss, Texas, and Vanderbilt, which all boast a pair of athletes.

Fan voting will once again play a part in the Golden Spikes Award in 2022. Amateur baseball fans will be able to vote for their favorite players on GoldenSpikesAward.com, starting on May 24 with the naming of the Golden Spikes Award semifinalists. USA Baseball will announce the finalists for the award on June 8 and fan voting will open at GoldenSpikesAward.com concurrently, remaining open through June 12.