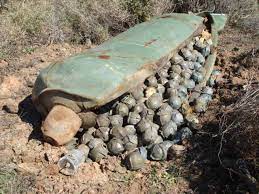 Unexploded cluster munitions have been found in Sri Lanka, a UN expert Allan Poston on land mines has claimed

Sri Lanka should be sent before the ICC, and a real political solution by holding UN monitored referendum for the Tamils needs to be on the agenda at the UNHRC.

Unlawful land seizure in the East was the one of many reasons why the Tamils took up arms to stop Sri Lankan aggression.”
— Tamils for Biden

Re: Do not use stall tactics to delay long-awaited justice for Tamil victims in Sri Lanka or accountability for the genocide committed by Sri Lanka.

In his book, President Obama blamed the UN for failing to save the Tamils during the 2009 Sri Lanka war against the Tamils in Vanni.

The UN should not continue to use stall tactics to delay the long-awaited justice for Tamil victims in Sri Lanka or international accountability for the genocide committed by Sri Lanka.

In their own land, Tamils still face
1. Intimidation by Sri Lankan armed forces and their plain-clothes intelligence agents.
2. Forceful land grabbing by Sri Lanka and settling of racist Sinhala Buddhist monks and their followers using the false pretense of mythology.
3. Enforced Sinhalese settlement in the Tamil areas.
4. Rapes, disappearances, and killings perpetrated by Sri Lankan armed forces.
5. An enforced slave economy engineered by the Sri Lankan government.
6. Seizure of Tamil farmland and most of the Tamil houses by the Sri Lankan army.
7. Sri Lankan army occupation, leading to distress or even post-traumatic stress disorder, which is marked by extreme worry, re-experiencing of the event, and an avoidance of things reminiscent of the trauma.
8. A systemic policy of trying to make Tamil youth addicted to dangerous drugs by bringing Crystal methamphetamine (“ice”) from Kerala, South India.
9. Poverty and homelessness in the transit camps.

We the US Tamils write this letter to encourage that real action be taken. Sri Lanka should be sent before the ICC, and a real political solution by holding UN monitored referendum for the Tamils needs to be on the agenda at the UNHRC.

If the UN fails to offer justice and accountability, the Sri Lankan army and the government will only do more harm to the Tamils and commit further atrocities.

Tamils need a secured and well-defended Tamil State that is not revocable.

Please do the following without any delay:
1. Bring Sri Lanka to trial in the ICC.
2. Instead of the trying to preserve the unworkable 13th amendment, hold a referendum to decide the future of the Tamils based on a secured, defended and revocable Tamil State.
3. Ask Sri Lanka to stop the illegal land grasb from the Tamil areas.
4. Repeal the PTA (Prevention of Terrorism Act).
5. Send a UN force to monitor Sri Lankan oppression in Tamil areas.

Unlawful land seizure in the East was the one of many reasons why the Tamils took up arms to stop Sri Lankan aggression.

Now another land grab is being heavily implemented by Sri Lanka in the North. These kinds of activities make the Tamils wonder what, if anything, can be done if UNHRC fails to act to stop this aggression. The situation is dire and urgent.

Without proper action against the Sri Lankan government, the UNHRC would effectively force other victimized ethnic peoples in different parts of the world to ignore the world order and find their own way of getting even with the aggressor. They would have no other choice.

Therefore, please bring the Sri Lankan war criminals before the ICC and serve the cause of justice in the form of secured, protected, and irrevocable Tamil State.

Note: Please watch this Sri Lanka’s Killing Fields: War Crimes Unpunished was an investigatory documentary about the final weeks of the Sri Lankan Civil War broadcast by the British TV station Channel 4 on 14 March 2012.
Here is the Link: https://videos.files.wordpress.com/iuDAk2yj/sri-lankas-killing-fields-by-channel-4-full-video.mp4