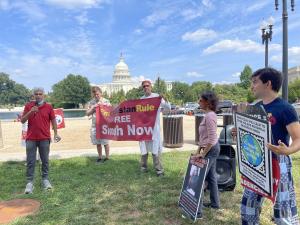 Rally for Sindhis at Capitol Hill

We want free Sindh, justice and peace. US and UN must support Sindhis. That is why we are here.”
— Munawar Laghari

WASHINGTON, DC, USA, August 15, 2021 /EINPresswire.com/ — Sindhis and their supporters gathered in Washington DC on August 14th and demanded US to sanction Pakistan.

To reclaim the day as an opportunity to take action and raise awareness for the silenced plight of Sindhis in Pakistan, which include state-sponsored murder and abductions, Sindhis and supporters gathered for a vehicular rally across the capital city of the United States.

Whether walking, driving, or cycling past, passersby could not ignore the block of almost 20 cars adorned with bright banners and filled with energetic, flag-waving passengers. The banners conveyed messages of resolve and even demands, including:

Water for life, save Indus River; and

UN must do a referendum for an independent Sindh.

Rally participants shared powerful words at two stops, at the Capitol building and the Pakistani embassy.

“We envision a world where Sindhis are free to return to their homes and explore their careers and revive their folk art, without children having to fear humiliation by an army seeking to expel them from their own land. A Sindh where Sindhis can live.”

Munawar “Sufi” Laghari ended the rally with closing remarks, saying “We want free Sindh, justice and peace. US and UN must support Sindhis. That is why we are here.”

Andrea Barron from Torture Abolition and Survivor Support Coalition (TASSC) also spoke at the Rally for Sindhis, she appreciated the efforts of Sindhi Foundation and Sufi Munawar Laghari who is also a founding member at TASSC. She also commended the team of Sindhi Foundation for completing 350 miles Long Walk to highlight Sindh issues in April this year.

The rally reflects the continued and creative resolve of Sindhi people to protect their freedom, culture, and natural resources, even — or perhaps especially — in the face of a worsening pandemic and political climate at home.

The Sindhi Foundation exists to build bridges between Sindhi people and the international community and promote freedom for Sindhis and all oppressed people. To learn more or get involved, visit our website at sindhifoundation.org