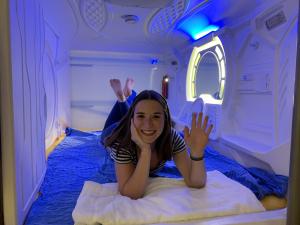 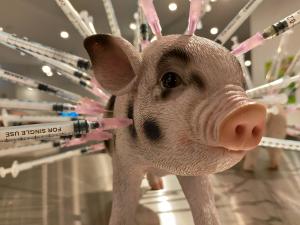 It’s all about the experience. Berlin presents new and unusual activities to consider for your next Berlin visit.

Those who wondered what a night in a spaceship might be like, can now experience sleeping in a stylish capsule at Berlin’s Space Night Hostel. Open since July 2021 and centrally located in Berlin’s Mitte district, the Space Night Hostel offers single or double sleeping pods with comfortable mattress and bedding, LED lights, a safe deposit box and adjustable climate – all at rates starting from about Euro 35/night. Bathrooms are shared, highest hygiene standards are observed, and there’s a 24/7 reception, free WiFi, lockers, and blow dryers. https://spacenight.berlin/en/

From maggot cheese to frog smoothies, Berlin’s Disgusting Food Museum displays an equally fascinating and disgusting menu of some 80 dishes from around the world. Conceived by curator Dr. Samuel West, the first Disgusting Food Museum opened in Malmo, Sweden in 2018. Since the summer 2021, Berliners and their guests now can also get sufficiently grossed out but are also invited to look at the concept of “disgust”, as experienced subjectively in different cultures. The on-site tasting bar offers some delectable samples. https://disgustingfoodmuseum.berlin/en/

Get close to Berlin and German history while running 100 miles along the former German-German border. The Wall Trail commemorates the victims of the former border that divided the country between 1961 and 1989. It runs along the former border strip, which is just over 161 kilometers around western Berlin. Most of the Berlin Wall Trail is paved and flat, with some sandy sections, uneven trail as well as busy public roads. Scheduled for August 13-14, 2022, the event is under the patronage of Rainer Eppelmann, a former GDR civil rights activist. https://www.100meilen.de/.

Berlin pure: Attend an event at Kraftwerk, the gigantic former power station-turned-massive events space.
Built in the early 60s this former East Berlin power station is not only a stunning example of Berlin’s industrial heritage, but also looks back at being one of the first legendary Berlin techno clubs, the Tresor. The raw, massive steel and concrete space is now used for large-scale events and exhibitions, ranging from the current Robert Irwin Light and Space exhibition (until Jan 30, 2022), to cutting-edge dance, art and music events planned for the coming year. https://kraftwerkberlin.de/en/location. https://kraftwerkberlin.de/en

Karl Marx and Capitalism at the German National History Museum
Karl Marx was one of the most globally influential German figures of the 19th century, and the most important critic of the volatility of “modernity” and capitalism.
Scheduled from January 26, until August 21, 2022, at the German National History Museum, Karl Marx and Capitalism aims to present the central themes of his thought, such as technology, nature, religion, increasing social polarization, the economic crisis, the oppression of women and destruction of natural resources in the context of his time. https://www.dhm.de/en/exhibitions/preview/karl-marx-and-capitalism/

Information on travel to Berlin at www.visitberlin.com