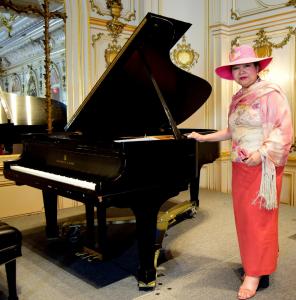 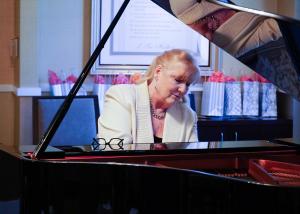 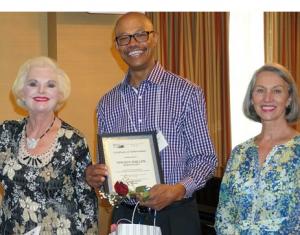 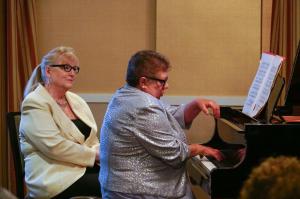 Founder and Board Chair of WIPAC, Ms. Chateau Gardecki was determined to hold the competition despite the challenges presented by the pandemic and brought together 15 artists to compete in the three-day competition. She acknowledged the members of the jury and the many contributors who made the event possible.

WIPAC President Ms. Portia Davidson introduced some of the contestants attending the reception, including Eladio Santiago, a Chopin enthusiast who is of Cuban descent and a longtime USA resident; Simon Finlow, a PhD in music from Kings College, Cambridge; Nathan Sisson Coleman, who was encouraged to pursue his pianistic talents as physical therapy for a severe back injury; Judy Darst, a piano teacher who has been a WIPAC contestant in previous years; Melinda Morse, who started her musical education playing the trombone, since that was the only instrument available for her to practice on; Professor Yun Liang who was encouraged by other pianists to participate in WIPAC because “they were so warmly received and treated with respect;” and Mark Cannon, a psychiatrist from New York City who pursued his passion for music as he pursued his medical career.

After two days of preliminaries and semi-finals hosted by the Church of Scientology of Washington, DC, at its location in the historic Embassy Building, an award ceremony and final dinner were held at the Cosmos Club in Washington, DC.

The competition is for pianists 31 years and older. Despite the challenges of the pandemic, fifteen pianists from different parts of the United States competed for prizes and awards. They represent a varied pool of amateur artists and are involved in various careers. A jury of professional pianists and musicians selected the winners during the competition. Outstanding performances of works by composers such as Beethoven, Ravel, Chopin and Mozart were highlighted.

Ms. Irene Longacre-Whiteside, from Dallas, Texas, won the competition in a very close race. She studied at the Royal Conservatory of Toronto, Banff International School of Fine Arts, University of Calgary and the Universität Mozarteum in Salzburg, Austria.

Dr. Vincent Phillips, a retired physician from Charlotte, NC, took second place playing pieces by Mozart and Chopin as well as Rachmaninoff and others.

Ms. Esfir Ross of Oakland, CA, born in the USSR then emigrated to the US after studying at the Kishinev Conservatory, took third place. She has participated in many competitions, festivals, and events throughout the world and recently was awarded 1st Prize at THE MUSE 2021, an online competition.

Washington International Piano Arts Council (WIPAC) was established in 2001 to promote international friendship and mutual understanding among nations, to provide an educational forum for all levels of professional and non-professional pianists, to help generate a renaissance of interest in great piano artistry, and to provide venues worldwide where classical music can flourish in many communities.

In her welcome representing the host organization of the first part of the competition, Ms. Beth Akiyama, Executive Director of the Church of Scientology National Affairs Office made the connection between the purpose of WIPAC and human rights. She specifically highlighted human right #19 of the United Nations Universal Declaration of Human Rights (UDHR), the Freedom of Expression. This right is aptly depicted as a person expressively playing the piano in the Youth for Human Rights International free educational materials which were available at the competition. https://www.youthforhumanrights.org/what-are-human-rights/universal-declaration-of-human-rights/articles-16-30.html

“The www.scientology.org supports the Washington International Piano Arts Competition because it so beautifully showcases and nurtures the artist and their importance to our culture,” Ms. Akiyama said. “As Scientology founder, and musician, L. Ron Hubbard said, ‘A culture is only as great as its dreams and its dreams are dreamed by artists.’”

For more information go to the following websites: