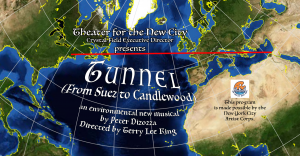 Peter Dizozza … [is] one of a handful of antifolk piano players with roots in musical theatre, and his humor is at once whimsical and politically charged.”
— New Yorker Magazine

Announcing the New York City premiere of TUNNEL (From Suez to Candlewood), a new environmental musical by Peter Dizozza, September 25, 2021 at Theatre for the New City.

Theater for the New City, Crystal Field Executive Director, presents TUNNEL (From Suez to Candlewood). An environmental musical theater project originally introduced at Theater for the New City’s 2021 Festival of the Arts, the story is a sometimes surreal, sometimes scientific, always mythopoetic exploration of the construction of canals and of dams creating lakes. A non-binary couple living in Egypt holds one share of stock in a corporation that owns the Suez Canal and Candlewood Lake, Connecticut, both of which are “man-made.” When the couple travels from Egypt to America to visit their lake, they connect with a couple of residents there that have been able to adapt and inhabit the flooded towns beneath the lake – by becoming amphibious.

“Peter Dizozza, a straitlaced-looking lawyer who is the director of Williamsburg’s WAH Theatre, [is] one of a handful of antifolk piano players with roots in musical theatre, and his humor is at once whimsical and politically charged.”
– New Yorker Magazine

Dizozza was selected to develop the show via the City Artist Corps Grants program, presented by The New York Foundation for the Arts (NYFA) and the New York City Department of Cultural Affairs (DCLA), with support from the Mayor’s Office of Media and Entertainment (MOME) as well as Queens Theatre.

TUNNEL (From Suez to Candlewood) will be presented as a staged reading, directed by Terry Lee King and featuring Danielle Aziza, Celestina Bradsher-Layne, Michael David Gordon, Anne Levey-Allauzen, Josh Miller and Sebasjiun, performing Dizozza’s original script, music and songs. The performance will take place at the Theater for the New City, Cabaret Space, 155 First Avenue, New York, NY 10003 at 8PM on Saturday, September 25th, 2021. Admission to this Program is free. This program is made possible by the New York City Artist Corps.
#CityArtistCorps @NYCulture

“One grand composer and pianist who continues to bring some fabulous music of all genres to everyone seeking a grand mixture of great sounds!” Kevin Scott

About the Composer
Peter Dizozza has been composing original musicals since 1996 with support from La Mama, Theater for the New City, The Lambs, and Manhattan Theater Source. Other work includes Prepare to Meet Your Maker, The Last Dodo, The Golf Wars and the James Bond Opera, A Question of Solitude.