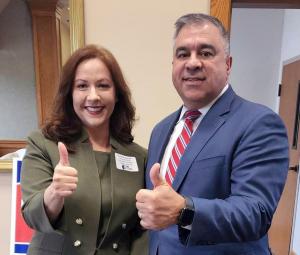 Senior advisor to Trump, David Bossie, with Kerry McQuisten at an Oregon event.

Kerry is a Trump supporting principled conservative who will fight every day to Make Oregon Great Again. ”
— David Bossie

BAKER CITY, OR, UNITED STATES, May 7, 2022 /EINPresswire.com/ — Oregon Republican gubernatorial candidate, Kerry McQuisten, is honored to announce that her candidacy has been officially endorsed by David Bossie. Bossie is the senior advisor to former President Trump, Deputy Campaign Manager for the Trump 2016 Campaign, producer of the newly released film “Rigged,” and President of Citizens United.

Bossie tweeted out the endorsement on May 3: “I’m proud to endorse Kerry McQuisten for Oregon Governor. Kerry is a Trump supporting principled conservative who will fight every day to Make Oregon Great Again. Oregonians need real leadership and common sense reforms from a political outsider who will always put Oregon first.”

McQuisten says, “We have four decades of leftist destruction to reverse. Oregon is upside down in every area due to failed management and infringement on our freedoms. Whether the issue is stopping this culture of crime that has been deliberately created here, or handing the power back to parents when it comes to our kids’ educations, I look forward to bringing back the Oregon we all once loved.”

McQuisten has also been enthusiastically endorsed by Steve Yates, President of Radio Free Asia under the Trump administration; President Trump’s first lady of election integrity, Dr. Kelli Ward, who serves as Chair of the Arizona Republican Party; former Oregon State Representative Greg Barreto; Utah State Rep. Ken Ivory who founded the American Lands Council; dozens of businesses around the state; and hundreds of individuals and elected officials from all corners of Oregon. She received gubernatorial endorsements from the Eastern Oregon Mining Association, Oregonians for Medical Freedom, and Restore Oregon NOW.

If elected, McQuisten, who is the mayor of Baker City, a seventh generation Oregonian, and a business owner, would become Oregon’s first female Republican governor, and the first governor from eastern Oregon since the 1950s. She would also be Oregon’s first Republican governor in four decades.
Additional information can be found at the candidate’s web site: www.KerryMcQuisten.com.