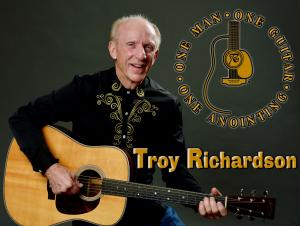 TROY RICHARDSON MUSIC – One Man, One Guitar, One Anointing 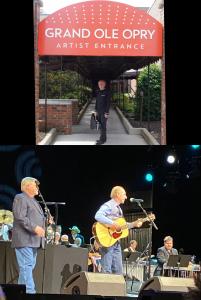 Was a fan before I ever met him. He’s Mr. Excitement and when Troy shows up business is about to happen!”
— Don Frost (Gospel Music Promoter, Producer & TV Host on TCT Network)

UNITED STATES, July 19, 2022 /EINPresswire.com/ — Troy Richardson is a singer/songwriter born and raised in Richmond, KY. Inspired by Grand Ole Opry greats, music sparked inside of teen Troy, receiving his first guitar, and quickly mastering the instrument. Over the next few years, he would sing and travel with band friends, performing country and southern rock. He grew to realize that something was missing. At a church revival, he found that which was missing a relationship with Jesus Christ. Troy describes the longest steps ever. “One foot in front of the other, I walked my way to Christ. When I got up from the altar that night, I knew that I was SAVED! A revival lasting six weeks would bring my entire family to know the Lord! God got a hold of us all!”

Troy has never met a challenge that God did not see him through, including a draft call in the Vietnam era. Proud to serve, but like so many young men, braving the uneasiness of the unknown. Basic training in Kentucky, advanced training in Oklahoma, Troy was assigned to the 2nd cavalry division of the US Army stationed in Bayreuth, Germany, where his unit served as guard patrol of the Czech border. God sheltered Troy and brought him safely back home to his family in Kentucky, and back to his music. Still, Troy’s love for his country did not end there as he would team up with Jeanie Bryd Bailey to promote their servant project, “Blanket of Blue”, providing blankets for homeless veterans.

Troy boasts of his love for his family and Linda his wife of over 50 years who considers herself the behind-the-scenes person scheduling road trips, bookings, and coordinates special events. With unwavering passion for the Lord and fellow man, this God-fearing man genuinely practices what he preaches and sings about. Troy’s greatest ministry moments are when the anointing brings hope to the hopeless and amazing grace to the stricken. An ordained Bishop in the Church of God for over 35 years, Troy has served as a pastor and an evangelist. In a nine-month period, in a small Kentucky town 200 souls received salvation and added to the Kingdom of God. Multiple vehicles lined the bridge, stopping to see 123 of these new converts being baptized. Across the states, those numbers today are over 2,000 sermons, 262 revivals, and over 700 more souls on their way to heaven. Troy was named 1995 & 1996 Church Of God Evangelist Of The Year, for the state of Kentucky.

Troy writes and records all original God-breathed songs. And his first national radio release “I’VE GOT A FRIEND” landed on the Christian Voice Country Gospel and Southern Gospel Charts. “That moment, Troy states, listening to our first national radio release was unforgettable. The words lifted right off the page and came to life!” Troy’s current radio single “STOOD ON THAT ROCK” is #1 in the legendary music magazine, CASHBOX on the Christian Country Top 100 chart; #4 in CROSS COUNTRY USA (Christian country magazine); and #6 in CHRISTIAN VOICE Magazine. Many doors of opportunity and recognition have continuously opened for Troy. He was instrumental in bringing a division of the Music City Christian Fellowship (Nashville) to Kentucky and was appointed Chairperson. Troy was honored to have been asked to perform in both 2019 & 2022 at the SUNDAY MORNING COUNTRY show that ends the week of CMA FEST at the Grand Ole Opry House. In 2018 Troy was presented the award for Entertainer Of The Year by the Josie Music Awards (Worlds Largest Independent Music Awards). And is currently nominated for The Josie Music Awards – Christian/Gospel/ Inspirational Vocalist Of The Year for 2022.

Most recently, Troy appeared on the TCT Network as a part of the Don Frost Family and Friends Gospel Music Hour. Troy was one of 12 artists to perform in a three-hour exclusive TCT Network special in August 2021. Troy has also been invited to be a part of the Don Frost Family & Friends Gospel Concert TOUR. The tour kicks off at the Victory Christian Center, Murfreesboro, TN on September 29, 2022. The Tour will include stops in Texas, Louisiana, Ohio and many more. There are two special tapings for TCT Network scheduled for Christmas and Thanksgiving 2022. All TCT performances are now available on Demand on the TCT Network (go to www.tct.tv then click on WATCH located at top then click CELEBRATE THE ROAD). Troy is also scheduled to perform at the 2022 ICGMA Convention in White Plains, MO on July 21st -23rd.

Troy is excited about the release of his latest album “PRAISE THE LORD”. The official CD Release Party, and meet & greet with Troy, for this project is July 30th, 2022, in Richmond, KY. The album was produced by John Rowsey at Hitmakers Studio in Wheelersburg, OH. This new project includes nine original songs written and performed by Troy. As always, each song takes on a different personality from Bakersfield sound, Country gospel to Worship. Listeners will enjoy each song all with the same message, Jesus Christ.

Impression isn’t all that’s important if the impact is bigger than life. Perhaps small in stature, Troy more than pays off with an energy that matches even the youngest of todays artists. Producer and TV show host, Don Frost, calls Troy “MR EXCITEMENT.” Troy owns the stage from the first strum of the guitar. Never disappointing an audience.
Troy and his wife, Linda have dedicated their life to the Lord. The most rewarding to them on this journey is the connection with so many people from all walks of life. They cherish being there through sad times, happy times, lives beginning, lives ending, and most of all lives reborn. ONE MAN, ONE GUITAR and ONE ANOINTING of God opens the Heavens for revival. Troy’s mission, “To share the Gospel through song. How will they hear the voice of truth without a song?” With God all things are possible; Troy Richardson always reaches for the highest possible!