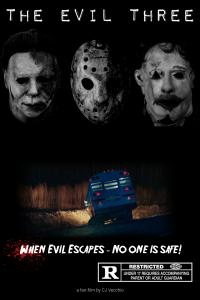 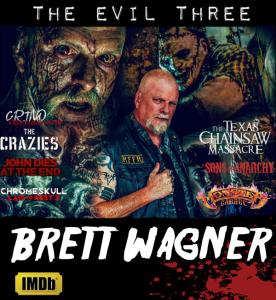 The Evil Three will star BRETT WAGNER among others.

HOLLYWOOD, CALIFORNIA, UNITED STATES, May 13, 2022 /EINPresswire.com/ — Happy Friday the 13th: Award winning director CJ Vecchio is proud to announce his latest project is one of Biblical proportions. The first fully interactive fan driven INDIEGOGO campaign for the; THE EVIL THREE.

The Evil Three takes the three most iconic characters from the slasher/horror genre; Jason Voorhees, Michael Myers and Leatherface and puts them in one of most anticipated fan-films to date.

Taking place in present time, the Smith’s Grove Sanitarium is closing due to federal & state budget cuts and they must transfer the last and most dangerous THREE (Jason, Michael & Leatherface) temporarily to the Livingston County Jail just outside Haddonfield, Illinois and lets just say…things go really bad.

“We are super excited about this Indiegogo campaign, it’s going to be the first fan-film crowdfunder where the fans decide where the story takes us.” says award winning director and writer CJ Vecchio. “The fans will choose who will win; Jason, Michael or Leatherface. They will also be able to vote on which ending we will film. It’s one of the most fan-friendly projects I’ve seen.”

Another first in the fan-film genre, the production team has over 50 IMDb Film Festival Wins. “We have some serious talent behind and infront of the camera!” states Daisy Shaffer the production organizer. In-front of the camera will be The Texas Chainsaw Massacre (2003) very own Leatherface BRETT WAGNER. We will be announcing more cast members weekly.

The Indiegogo will run for 60 days and filming will start in the Chicago burbs in late August/September.

The fan-film will be created by a team of fans of the Slasher universe, THE EVIL THREE crowdfunder launches May FRIDAY THE 13TH on INDIEGOGO.

DISCLAIMER: We would like to formally acknowledge that THE EVIL THREE Fan-Film is in no way associated or affiliated with any company or anyone associated and that own the rights to the Friday the 13th, Halloween & The Texas Chainsaw Massacre franchises’. If anyone from those entities takes issue with what we are trying to accomplish, we will happily comply with whatever is asked of us by those parties. All of the crew are volunteer’s and helping make this film because of their love of the lore.

The money raised is to cover the unavoidable costs associated with producing a professionally made film. No long-term profit or commercial ventures will ever be made.

We value transparency and any concerns or any questions in regards to this campaign, please contact us at cjvecchio68@gmail.com.

The budget for this project is to cover expenses needed to complete the film. We are not trying to profit or compete with the existing franchise. This film is strictly for the fans, from the fans. The final product will be made available to everyone via various web outlets. Backers will receive an exclusive first look at the completed film and updates including behind the scenes over the course of production.