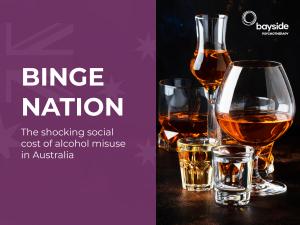 Australia has recently been named the heaviest drinking nation in the world.

Since the Covid pandemic, Australians are turning to the bottle more often than ever. As a result, alcoholism and binge drinking have skyrocketed in Australia.

Regular alcohol ingestion may contribute towards depression and gears down our central nervous system. More and more Australians are using alcohol to attempt to deal with their psychological issues.”
— Adam Szmerling, clinical psychotherapist

Since the Covid pandemic, Australians are turning to the bottle more often than ever. As a result, alcoholism and binge drinking have skyrocketed in Australia.

Australia has recently been named the heaviest drinking nation in the world after Australians spent more of their days drunk in 2020 than any other country. While a large proportion of people maintained their consumption of alcohol at pre-COVID-19 levels from March to July 2020, many people reported higher levels of stress. In particular, women were found to be more likely to increase their alcohol consumption over this period.

It was also found that 1 in 10 Victorians drink at a risky level at least once a week, and almost a quarter of Australians have reported feeling regret for becoming intoxicated.

Adam Szmerling, Accredited Mental Health Social Worker (AASW) and clinical psychotherapist (PACFA) at Bayside Psychotherapy Melbourne has suggested that psychological issues may also be linked to the rise of binge drinking in Australia, stating “Regular alcohol ingestion may contribute towards depression and gears down our central nervous system. More and more Australians may be using alcohol to attempt to deal with their psychological issues”.

Bayside Psychotherapy has compiled data from various sources into a visually appealing infographic.

When someone develops an alcohol addiction, they raise the risk of causing bodily injury to themselves and others around them. For example, consuming four standard drinks doubles the risk of suffering an alcohol-related injury.

According to a recent study, 15% of Australians risk injury or even death due to alcohol misuse. Harmful alcohol use is a massive issue for young people in Australia. This is particularly concerning given the negative long-term impacts of alcohol abuse, including addiction and chronic health problems.

Alcohol misuse can lead to acts of aggression and domestic violence. It has been reported that 40% of Australians have been affected by alcohol-related violence at some point in their lives. 18% of people have reported that they have directly experienced it.

Alcoholism doesn’t just affect one’s personal life; it often crosses over into many people’s professional lives. Consuming too much alcohol can lead to carelessness, absenteeism, or incomplete tasks at work. Over $2 billion yearly is lost in workplace productivity because of alcohol-related absenteeism.

The Australian Government is determined to work with communities, health workers, clinics, parents and young people to implement a National Strategy on Binge Drinking that includes a new focus on personal responsibility.

Getting help with binge drinking

How do you know if drinking alcohol has become a problem? One tell-tale sign is when drinking starts interfering with your ability to lead a normal life. Some signs include:
– A reliance on alcohol to relax or fall asleep at night
– Drinking in the morning before school or work
– Lying about how much alcohol you drink
– Other people comment on your drinking

At Bayside Psychotherapy, we’ve seen an increase every year in the number of people coming to us for help with binge drinking issues. Our counselling clinic is equipped to deal with this growing problem, and we’re committed to helping those affected. If you or someone you know is struggling with binge drinking, please don’t hesitate to get in touch.