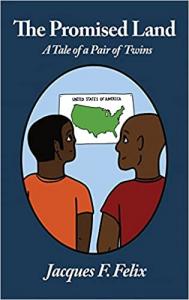 A Better Life Away From Haiti: Emigrants in the Promised Land

But, in general, it was just hard for them to make friends because they were too busy studying hard and dreaming of a better future for themselves.”
— Jacques F Felix

LOS ANGELES, CALIFORNIA, UNITED STATES, April 15, 2022 /EINPresswire.com/ — Author Jacques F. Felix will be one of the featured authors in the upcoming Los Angeles Festival of Books 2022 with his published book titled The Promised Land: A Tale of a Pair of Twins. A slice of life and a social novel about the current political and economic situation in the author’s native country, Haiti. It narrates how the Haitian youth are trying to escape their country by any means possible in search of a successful life and that places to achieve that goal are the United States and South America. The United States of America has been notably called the proverbial Promised Land, where many emigrants from the world seek to enter by any means possible.

A new view to be appreciated by people who wanted to change their life in the long process. It is a tormenting tale that hopes to change the viewpoints of those who frown upon immigration.

Jacques F. Felix was born in 1993 in a small town in Haiti called Saint Michel de L’Attalaye, in the Artibonite department. He immigrated to the United States in 2010 and attended Middleton High School in Florida. He graduated in 2012 and joined the Marine Corps, where he served for four years. Mr. Felix has loved writing, playing soccer, running, and reading ever since he was young. Currently, he is attending Saint Leo University and majoring in Sociology with a concentration in Diversity and Inequality.

The Promised Land: A Tale of a Pair of Twins
Written by: Jacques F. Felix
Kindle |
Hardcover |
Book copies are available on Amazon, Barnes & Noble, and other online book resellers.