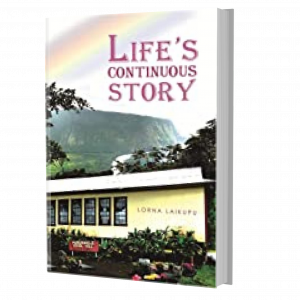 The book never fails to start with an exposition of Hawaiian landscape — a breathtaking
oceanic view where trade winds blow and the sky is filled with the whitest, fluffiest
clouds.”
— Lorna Laikupu

LOS ANGELES, CALIFORNIA, UNITED STATES, June 30, 2022 /EINPresswire.com/ — Lorna Laikupu’s Life’s Continuous Story is a literary fiction narrating the island life of Hawaiian rich culture and its development. Due to the booming economic industry in Hawaii, the community invested in the plantation. The development of Hawaiian plantation had a plain and linear progress, until such time that it caused the spread of pandemic diseases in communities. Locals who reside within the vicinity of the plantation start getting sick with incurable and deadly disease. With suspected beliefs and earnest curiosity, this leads the two main characters – Kat and Manny – to investigate the cause.

The book never fails to start with an exposition of Hawaiian landscape — a breathtaking oceanic view where trade winds blow and the sky is filled with the whitest, fluffiest clouds. Here, Laikupu warmly introduces Kat and Manny, two good and adventurous childhood friends, whose friendship has strengthened for seven years. Their families work together on the sugar plantation on the Hamakua side of Hawaii. Further, their two opposing personalities – Manny as an optimistic and cheerful guy, while Kat as an ambivert yet outgoing gal – united as their spirited youthfulness leads into a one of a kind adventure. As the plot develops, Kat and Manny embark on a promising journey where both unveiled the revelations of love, friends, and mistrust. Too, the journey vows to change their lives and inspire appreciation for the Aina, the land, and all it offers.

As a practicing nurse, Lorna Laikupu was inspired to write Life’s Continuous Story from her past lived experiences used in Hawaii’s plantation days. Today, she lives with her husband, three sons, one daughter, and several Hanaii (adopted) children.

Book copies are available at Amazon, Barnes & Noble, and other online book retailers.