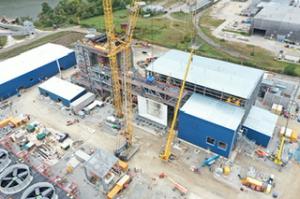 We are currently in the startup phase”
— Bo Wholey, president of Long Ridge Energy Terminal

HANNIBAL, OHIO, US, August 25, 2021 /EINPresswire.com/ — The Long Ridge Energy Generation Project, a 485-MW facility being equipped to run on a mix of natural gas and carbon-free hydrogen, is nearing completion at the site of a former aluminum smelter on the banks of the Ohio River.

“We are currently in the startup phase,” Bo Wholey, president of Long Ridge Energy Terminal, an affiliate of Fortress Transportation and Infrastructure Investors LLC, said in an Aug. 11 email. The power plant in Hannibal, Ohio, will be “fully operational” in early September, with hydrogen to be introduced in November, Wholey added.

The facility first will burn a fuel blend that includes 5% hydrogen in a General Electric Co. H-class gas turbine. The plant is intended to transition to 100% green hydrogen over the next decade by relying increasingly on renewable energy to power electrolysis machines that split water into its hydrogen and oxygen elements.

The project has access to industrial byproduct hydrogen for initial testing, according to Long Ridge, but the company is partnering with New Fortress Energy Inc. for the green hydrogen transition. It is also exploring underground salt formations for large-scale hydrogen storage.

‘Enormous potential’ but ‘too expensive’

The hydrogen-natural gas generation project is the centerpiece of an intended sweeping makeover of the industrial site, where Long Ridge also plans to develop a 125-acre data center campus with 300 MW of capacity. Advocates hope the project marks the beginning of a new era for hydrogen in helping to decarbonize the power sector and other areas of the economy.

Major global equipment suppliers Mitsubishi Corp., Siemens AG and Wärtsilä Oyj Abp, numerous big U.S. electric and gas utilities and a host of project developers are also placing big bets on hydrogen. Several additional U.S. natural gas-hydrogen hybrid power projects are underway, the largest of which is the Intermountain Power Agency’s planned conversion of an existing coal plant into an 840-MW combined-cycle gas facility by 2025 that would combust up to 30% hydrogen and gradually move to only green hydrogen. Most of the plant’s output is under contract with the Los Angeles Department of Water and Power.

But the Union of Concerned Scientists and other clean energy groups have pushed back on burning hydrogen. They have flagged concerns over dangerous nitrogen oxide emissions that occur even with green hydrogen, even though they are supportive of hydrogen fuel cells, which can produce power without combustion.

Moody’s is skeptical the power sector will play a major role in the development of hydrogen on economic grounds, at least over the next decade, the credit rating agency said in an Aug. 11 report.

“While hydrogen has enormous potential in power and heating applications, including energy storage, electric and gas utilities are unlikely to be the primary demand growth driver of the hydrogen market, either in the US or globally,” Moody’s said. “High production costs and efficiency losses make hydrogen too expensive as a fuel for power generation today.”

Significant infrastructure investments are required to make hydrogen a significant player in the power sector from its current “practically nonexistent” level, Moody’s added, pointing to transportation and industrial uses as more economically viable. Refineries, along with ammonia and methanol production, account for the vast majority of U.S. hydrogen use today.

National and state policies such as carbon taxes could help make the energy carrier more broadly cost-competitive, according to the report. By 2035, “hydrogen is likely to play an important role in US efforts to eliminate carbon emissions from the power sector,” Moody’s said.