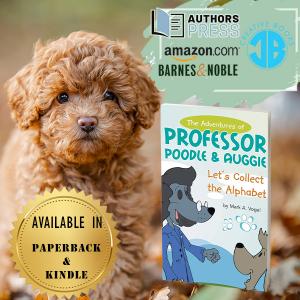 The Clever and Witty Characters of the Letter of the Alphabet, Hop In and Join our Trip!

“The U they knew might play catch. So they threw it a V and told it to fetch! But the U refused and just stood there. They tried to shoo it but could not move it anywhere.”—”
— Mark A. Vogel

LOS ANGELES, CALIFORNIA, USA, April 6, 2022 /EINPresswire.com/ — Author Mark A. Vogel will be one of the featured authors in the upcoming Los Angeles Festival of Books 2022 with his published book titled The Adventures of Poodle & Auggie: Let’s Collect the Alphabet. It is a children’s book about two dogs who are in their exploration of finding the letters of the alphabet. They encounter humorous and fun trips with the different characters of the letters. It is written cleverly and although written for younger children, is a fun read for readers of all ages.

The author shares, “from cover to cover, young readers and parents will be delighted as they turn each page to read about a new adventure with a new letter. Professor Poodle portrays the image of an intelligent dog who always seems to guide Auggie, his sidekick, in the right direction.”

“Retired from the United States Coast Guard, children’s writer Vogel has made entertainment for young children a new avocation. Vogel’s narrative centers on the search for letters and has an unusual twist in that the letters are not the starting of any obvious word, except in the case of the irksome B that attacks Auggie in the hay as he looks for A. The relation between the letters and the words possibly associated with them is far subtler, allowing the attentive reader to make guesses.” — Reviewed by Barbara Bamberger Scott, US Review of Books.

Mark A. Vogel is a father, husband, and grandfather to the members of his family. In 2006, he retired from the United States Coast Guard. He currently lives in Chesapeake, Virginia. He believes that his books will help children in learning the alphabet and numbers in easy-to- understand and fun stories with the turn of each rhyming page.