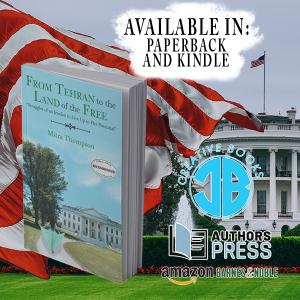 What if you Need to Get Lost to Find your Freedom?

“Once again we were faced with situations that were out of our control and unpredictable.” —”
— — The US Review of Books.

LOS ANGELES, CALIFORNIA, USA, April 7, 2022 /EINPresswire.com/ — What if you were denied the privilege others have? Iranian descent Mitra Thompson’s well-penned book titled From Tehran to the Land of the Free: “Struggles of an Iranian to Live Up to Her Potential” speaks for the millions that have and continue to endure persecution and find themselves facing barriers in their right to live a life of abundance and opportunity. Mitra clearly captures the persecution that stems from people with the Baha’i faith upbringing and what immigrant life in the United States entails. Many readers will have the chance to experience a hint of recognition throughout Mitra’s journey in achieving her dreams, while those foreign to such matters will be astonished at the in-depth glimpse of an Iranian woman whose steadfast nature prevented her from becoming another figure of an oppressed Iranian descent.

From Tehran to the Land of the Free centers around the story of Mitra. A young dreamer who believes that she could overcome any obstacle in her life through her determination. Her only setback was that she was unable to do everything she wanted and dreamed of because she was among the minority in Iran and was also a female and a member of the Baha’i Faith. Living in a country in which Islam was the predominant religion, she was not free to spread her wings and go where she wants the wind to take her. She was often scared and alert throughout her childhood in fear for her and her family’s safety. Only when she came to America was she able to make something out of herself and live a life of which she only dreamed of back in Iran.

Though she struggled to keep her family together, in America, all of her dreams slowly came true when she tasted the fine wine of freedom. Although it was not easy in the beginning, and she encountered various difficulties along the way, Mitra grabbed hold of the opportunities presented in her new home and created a happy life for herself and her family.

In the midst of Mitra’s childhood, there are numerous that are completely jarring that completely seared into her mind to be remembered all her life. It leads to a harsh reality of division and persecution in adulthood. From the memoir, it becomes clear that the only way to escape an environment so unfair that it does not deem education and work fit for women is to leave it entirely.

Independent to her core, Mitra refuses to let anyone keep her from growing, even when that person is her own mother. Seeing Mitra’s life roles change from a dreamer who only aspires to become professional in the laboratory to a mother who could not be even prouder of her child for independently making the decision to enlist in the army is something anyone should learn from. To top the list of Mitra’s list of amazing qualities, her storytelling arc is also commendable; sharing a narrative with so much information and avoiding clunky writing is something rarely done as seamlessly as this piece. This memoir is a must-read, particularly for immigrant populations who will surely form an instant connection with both the author and the book.

Mitra Thompson was born in Tehran, Iran, and migrated permanently to America to pursue higher education that was denied to her in Iran because of her religious beliefs. After her husband passed away at the end of 2011, and at her daughter’s request, she decided to write this memoir. Mitra has two biological kids and one stepdaughter, all of whom are married and have two children of their own. She is currently residing in North Carolina.
From Tehran to the Land of the Free: “Struggles of an Iranian to Live Up to Her Potential”
Written by: Mitra Thompson
Kindle |
Paperback |
Book copies are available at Amazon, Barnes & Noble, and other online book resellers.