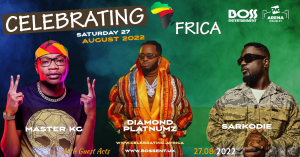 Three of Africa’s biggest stars -Sarkodie, Master KG and Diamond Platnumz come together to celebrate their continent on the global stage in London.

This Never Seen Before Event Goes To Bring To Fore The Strides Of Africa In The Music And Entertainment Scene Over The Decade And Beyond, Highlighting The Most Amazing Of African Talents And Rich Culture

Master KG’s ‘Jerusalema’ transcended its initial viral status to become a global cultural phenomenon. It has now accumulated a dazzling 800 million combined streams as well as 7 billion views on Tik Tok for its vibrant dance challenge, which has captured the imagination of people world wide from Angola to Israel to London.

The ‘Jerusalema’ tune helped as a source of relief during the corona pandemic with most households in the UK performing the transformation dance routine including the Irish Police and NHS in the UK who helped tremendously in solving the corona pandemic also Iconic stars such as Cristiano Ronaldo and Janet Jackson have been big supporters, and even the South African president Cyril Ramaphosa encouraged his nation to join the fun. Spotify recognized the Artiste by erecting a billboard on Times Square for his latest song “Shine Your Light”, Featuring Akon and David Guetta.

Diamond Platnumz is the most awarded artist in East Africa and the most awarded artist in Sub-Saharan Africa. He has recently been awarded by the parliament of Tanzania for his dedication to promoting music and the promotion of Swahili and Tanzanian culture across the diaspora. His ability to sing in English, French and Swahili coupled with amazing stage craft has made him one of the most influential artistes in the Tanzania, East and Central.

Uptempo tracks accompanied by blockbuster music videos such as “Nana,” “Kidogo,”, “Jeje” and most recently “Gidi.” The Artiste’s efforts have earned him over five dozen awards and nominations including one for “Best International Artist” at the BET Awards 2021. Diamonds is the lead cast in the recent sensational Netflix Reality Show “Young, Famous & African”.

Sarkodie the African rap ‘god’, first artist to win the Best International Flow award at the BET Hip Hop Awards, popularly known for his poetic rap flows in his local Ghanaian dialect. Sarkodie’s sound – a fizzing blend of hiplife, hip-hop, and Afrobeats – has led to sold-out shows at London’s O2 Kentish Town Forum and performances with an impressive array of international names, including T-Pain, Ludacris, Busta Rhymes, and R&B supernova Miguel.His latest Album No Pressure which was released in the year 2021 is doing well and was named the Best Album and the most streamed album on Spotify in Ghana. He received a Gold Presidential Honor for music.

On the 27th of August, 2022, a historic music concert will take place at the OVO Arena in London. The biggest African stars from all genres of Afro-beats music will come together to celebrate Africa in a concert during Carnival weekend.