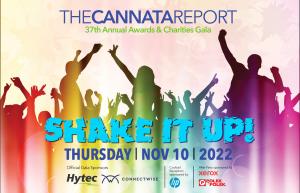 Shaking things up is vital to the industry’s evolution, and we want to celebrate how it empowers new growth and expansion throughout the independent dealer channel.”
— CJ Cannata, president and CEO

HAMBURG, NEW JERSEY, UNITED STATES, August 11, 2022 /EINPresswire.com/ — Shake It Up! That’s how The Cannata Report describes what’s happening in the independent dealer channel of the office technology industry and how it will celebrate at its 37th Annual Awards & Charities Gala on November 10, 2022.

Sponsored by Hytec Dealer Services and ConnectWise, the 37th Annual Gala will honor the very best of the independent dealer channel and raise funds to create the Marie Cusumano Endowed Scholarship at Hackensack Meridian School of Medicine. Each year, beginning in the spring of 2024, a scholarship will be awarded to a student selected by the school’s academic board. The scholarship pays tribute to The Cannata Report Founder Frank G. Cannata’s late sister. The Cannata Report has a long-standing relationship with Hackensack Meridian Health and has raised $1.3 million for various entities funded by Hackensack Meridian Health Foundation.

“The theme of our Gala salutes the dealers, vendors, and OEMs embracing new opportunities, investigating new avenues of diversification, and initiating fresh innovations. Last year, our Gala was themed Start Me Up, and this year we are taking it one step further with Shake It Up. Shaking things up is vital to the industry’s evolution, and we want to celebrate how it empowers new growth and expansion throughout the independent dealer channel,” said CJ Cannata, president and CEO of The Cannata Report. Added Cannata, “This year’s Gala holds special meaning as we pay tribute to my beloved Aunt Marie and my father’s dear sister. She was incredibly generous and gave so much of herself to her friends and family.”

In a new tradition established in 2020, a select group of dealers will serve as presenters and announce the winners of the Frank Awards. In a long-standing tradition, Robert Goldberg, general counsel of the Business Technology Association, will reprise his role as the event’s emcee. HP will sponsor the Gala’s Cocktail Reception, and Xerox and Polek & Polek will sponsor the After Party.

ABOUT THE CANNATA REPORT
Since its launch in 1982, The Cannata Report has been the leading intelligence resource for imaging reseller principals and senior executives within the office technology, business technology, managed services, and imaging industries. Forward-thinking analysis and thought leadership complement in-depth coverage of a wide range of topics, including professional services, workflow solutions, IT management, office products, production and industrial print, supplies, vendor finance, mergers and acquisitions, breaking news, market trends, and more.