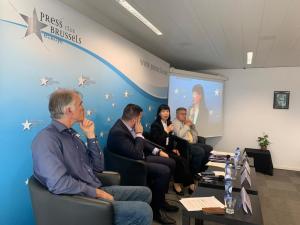 The illegal poaching of organs in China, is another reason why we should be critical of the Chinese regime.

It is vital that we talk about Communist China’s completely deplorable behaviour… It is undeniable that China has targeted minorities, including Falun Gong…”
— Tomá Zdechovsk, a prominent Czech Member of the European Parliament

BRUSSELS, BELGIUM, July 1, 2022 /EINPresswire.com/ — On June 29th 2022, a high-level symposium at the Brussels Press Club examined the continued human rights crisis in Communist China over forced organ harvesting. Delegates at the meeting heard terrifying first-hand witness evidence from Zhang Yanhua, a Falun Gong practitioner who had been arrested and imprisoned in China and had been subjected to regular medical testing to determine her fitness as an organ donor for a paying customer. She was eventually not selected. There was also a reference to the European Parliament resolution of 5 May 2022 with Procedure number : 2022/2657(RSP) on the reports of continued organ harvesting in China (2022/2657(RSP), in which we provide here the link: https://www.europarl.europa.eu/doceo/document/TA-9-2022-0200_EN.html if you are interested in the topic.

Crime against humanity
Tomá Zdechovsk, a prominent Czech Member of the European Parliament, said that “it is vital that we talk about Communist China’s completely deplorable behavior… It is undeniable that China has targeted minorities, including Falun Gong… It is undeniable that organ harvesting is state-sponsored.” Head of the legal team for the Washington, D.C.-based NGO Doctors Against Forced Organ Harvesting, Spanish lawyer Carlos Iglesias, accused the CCP of being “serial murders on a huge scale” and perpetrating “a crime against humanity, a true genocide.”

For those who want even more info, these articles are also interesting.
1.https://www.forbes.com/sites/ewelinaochab/2019/06/17/the-china-tribunal-pronounced-its-verdict-on-organ-harvesting-in-china/
2.https://www.eupoliticalreport.eu/chinas-illegal-organ-harvesting-on-an-industrial-scale/
3.https://eutoday.net/news/politics/2022/chinese-communist-party-serial-killers-on-a-massive-scale-says-leading-eu-lawyer