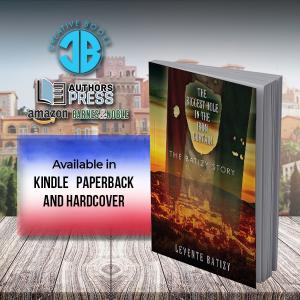 Descendant ruminates on the struggles of his family’s displacement, including starting life over in a new land in near poverty.”
— Levente Batizy

LONDON, UNITED KINGDOM, March 29, 2022 /EINPresswire.com/ — Dr. Levente Batizy is a respected physician in his community. He is happy to serve his community with his expertise, but behind the congenial smile of this Hungarian immigrant is a story most people could not imagine living through.

PRESS RELEASE | LONDON BOOK FAIR 2022
Republic of Hungary. Shortly after WWII with the installation of the communist puppet government in Hungary by the occupying Soviet Army any family who had a prior title of Nobility was blacklisted by the communist party. The Batizy family endured hardship during the communist rule from 1947 to 1956. When the Hungarian Revolution against the communist dictatorship broke out on Oct 23rd,1956, the willingness of the author’s father to participate in the revolution made their family a target for reprisal after the revolution failed. All this and more are shared by Dr. Batizy in his book The Biggest Hole in The Iron Curtain: The Batizy Story.

“There is little self-effacing candor in this narrative, but the positive side is that the family is truly extraordinary…The Batizy family became known statewide in Tennessee as a family of swimmers, with each child performing well on school and community swim teams. In the final analysis, the book is a testament to strong families with strong ideals and standards. The Batizy family history would make a remarkable feature film or documentary.”— Kate Robinson, US Review of Books.

Dr. Batizy is the fifth oldest out of fourteen children. He was only ten years of age when he was torn from his birth mother and grandmother to escape with his family from their native land during the 1956 Hungarian Communist Revolution. The blended family finally arrives in America and begins the memorable adjustments and trials that will eventually yield success. Then, fifty years later, celebrate with Levente as he and his son returned to Budapest to celebrate Hungary’s freedom. He took up pre-med at the University of Alabama and attended medical school in Kirksville, Missouri.

His work will be on display at the London Book Fair in June 2022, to be held in London, United Kingdom.
The Biggest Hole in The Iron Curtain: The Batizy Story
Written by Dr. Levente Batizy
Kindle |
Paperback |
Hardcover |
Book copies are available at Amazon, Barnes & Noble, and other online book retailers.