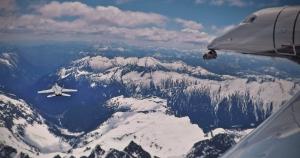 BURBANK, CA, USA, May 27, 2022 /EINPresswire.com/ — Team5 Aerial Systems, the foremost provider of aerial camera systems to major feature films, in partnership with Phenom Camera-Ship, provided the PCS-1 aircraft to Paramount Pictures for the making of Top Gun: Maverick. The aircraft was integral in providing the ability to film high-speed aerial action sequences alongside the United States Navy during the film’s production.

Phenom Camera-Ship and Team5 Aerial Systems collaborated to develop the PCS-1 in order to provide the unique aerial cinematography platform to Hollywood’s most acclaimed aerial cinematographers. The PCS-1 was born from an Embraer Phenom 300 airframe modified to handle the demands of carrying a pair of stabilized aerial camera systems while still operating unrestricted within the FAA’s standard category.

As the only FAA certified high-speed, high altitude, pressurized filming platform utilizing latest-generation digital gimbals, the Phenom Camera-Ship (“PCS-1”) was created to fill a gap in the aerial filming industry left by much smaller, “experimental” aircraft.

The PCS-1 can operate with Shotover F1 systems mounted both fore and aft simultaneously, via a crew of 2 Pilots and up to 6 Passengers, all while flying in business-jet comfort at a speed of up to 350 knots, an altitude of up to 45,000 ft. and with a duration of over four hours.

About Team5 Aerial Systems:
The leading provider of aerial camera systems for major feature film productions, Team5 provides high-end gyro-stabilized camera systems, cameras, lenses, helicopter mounting brackets and microwave downlink transmission equipment, to studios and production companies worldwide. Team5 works with local partners in different regions throughout the globe to offer best-in-class products and services while drawing from the largest single inventory of aerial equipment to support productions worldwide without delay. The network of Aerial Coordinators, Film Pilots and Aerial DoPs that work with Team5 are among the most distinguished aerial filming crews in the industry. www.Team5.rentals

About Phenom Camera Ship:
The Phenom Camera-Ship (PCS-1) was built specifically for filming unique, high-speed aerial sequences for feature films, television series and commercial productions. PCS-1 has been used by the top brands in the aerospace industry as well as the US Military, flying alongside some of the most technologically advanced aircraft in the skies. PCS-1 has earned its stripes by delivering stunning imagery while “pushing the envelope” safely. www.PhenomCameraShip.com