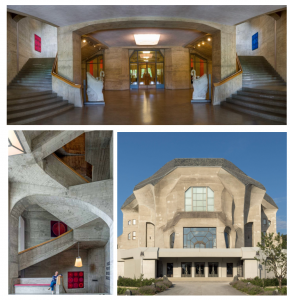 Presentation at the Goetheanum

BASEL, SWITZERLAND, September 7, 2021 /EINPresswire.com/ — On the occasion of Art Basel week, the famous Goetheanum in Dornach (near Basel) opens doors and presents a unique solo show ‘Concentring Circles’ by the Swiss artist Heikedine Günther. The Goetheanum is built in 1924 and the worldwide Mothership of the Anthroposophical Society is embedded between medieval castles enthroned on a hill.

Creating the perfect harmony between the strong concrete architecture (organic shaps) and the powerful paintings of the Swiss artist, the exhibition includes over 70 works, taking over a large part (more than 2000qm) of the building. The space is an incomparable organic material ensemble in which holistic thinking and natural philosophy coexist, creating a starting point for artistic thinking.

Heikedine Günthers leitmotif is the “core”. Everything between microcosm and macrocosm. Expressed in paintings between abstraction and natural forms.

In this exhibition, Heikedine Günther shows exclusively works from the past 3 years.

During the pandemic, she had the opportunity to concentrate and work in a focused manner in her studio up in the mountains in central Switzerland.

What is unique about Heikedine Günther’s paintings is, that they are all primed with a layer of gold, which among other things bring out the layers of colour so brilliantly.

One of the highlights of the exhibition is the midnight-blue painted Chapel Room on the first floor, where the artist presents her Trypichon “Concentric Circles Luminance” (3 x 200cmx200cm).In a rhythm of 3min “light on” and 1min light off” the glowing Concentric Circles raise from the wall into the room. The installation shows how to make the invisible, visible.

Heikedine Günther’s paintings are as complex in their philosophy as the colours are on their canvases.

Inside the imposing environment where Hilma af Klint lived and worked, Heikedine’s work resonates and creates a unique narrative or story about her artistic journey the value of creativity as inner power, facilitating a dialogue between art, architecture and nature.

With the theme of Concentric Circles, Heikedine Güntherʼs works examine the inexhaustible interplay between the microcosm and the macrocosm and raise questions about the nature of painting and the source and core of creativity itself. In a concave-convex dialogue, the works
tell a profound story of meaning and prompt the viewers to immerse themselves in contemplative colour zones, which correspond with the colourful and sculpturally shaped rooms.

Apart from exhibiting notable exhibitions, the Goetheanum hosts the School of Spiritual Science, which was initially inaugurated by Rudolf Steiner back in 1923, and the General Anthroposophical Society. Until this day it is the center for artists like Joseph Beuys or Meret Oppenheim who lived and developed many of their artworks at this special place.

In this spiritual and meditative environment of Dornach, there are more architecturally interesting buildings created for cultural or social purposes such as the glasshouse (originally the studio for processing the glass windows), the eurythmy houses, the transformer house or the artist house de Jaager (named after the Dutch sculptor Jacques de Jaager; 1885–1916). The architecturally unique area arose in the endeavour to build an “anthroposophist colony” around the central Goetheanum back in time.