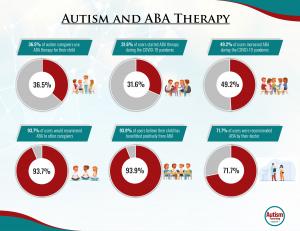 A new survey from Autism Parenting Magazine has revealed more than a third of autism caregivers use ABA therapy to support a child on the spectrum.

We believe ABA therapy, as with any other therapy, is only ever as good as the provider and there is certainly no one-size-fits-all solution for every individual.”
— Emily Ansell Elfer, Autism Parenting Magazine

NEW YORK, NEW YORK, UNITED STATES, February 14, 2022 /EINPresswire.com/ — Autism Parenting Magazine has revealed more than a third of autism caregivers use ABA therapy to support a child on the spectrum, while 31.6% started therapy during the COVID-19 pandemic.

In a survey sent out by Autism Parenting Magazine (APM) to more than 160,000 email subscribers, over a third of responders confirmed they are using an Applied Behavior Analysis (ABA) therapy provider for their child.

In fact, a substantial 36.5% of caregivers reported they use ABA and 93.7% of these individuals would recommend ABA therapy to other autism caregivers.

A total of 72.4% of respondents identified themselves as autism parents, while the remaining participants were grandparents, full-time carers, teachers, therapists, doctors, or individuals on the spectrum.

ABA therapy can support children on the autism spectrum in many ways, including the development of social skills, life skills, strengthening communication, and adapting challenging behaviors.

A total of 71.7% of ABA users surveyed were recommended ABA by their doctor. The main reason for choosing ABA for those surveyed was to target challenging behaviors including meltdowns, as well as to teach socially acceptable behaviors while building life skills.

APM’s survey revealed a surge in parents signing up for ABA since the COVID-19 pandemic began. A total of 31.6% of ABA users stated they started ABA sessions during the pandemic, while a significant 49.2% found they have needed more ABA sessions since the pandemic started.

ABA is seen as an early intervention therapy, so it was not surprising that 68.8% of ABA users surveyed said their child started the therapy under the age of five years old.

“While ABA therapy is a controversial topic, the survey results do suggest it is growing in popularity as a therapy option. It was particularly interesting to note that 86.7% of respondents said ABA has helped them to better understand their child’s needs,” said Emily Ansell Elfer, Editor of Autism Parenting Magazine.

“At APM we provide information on a range of different therapies for families to choose from. We believe ABA therapy, as with any other therapy, is only ever as good as the provider and there is certainly no one-size-fits-all solution for every individual.”

More information and a full breakdown of the survey results can be found here.

Autism Parenting Magazine is an award-winning publication focused on improving the quality of life for families affected by ASD. Established in 2012, the magazine focuses on the objective publication of autism-related topics, developments, treatments, news stories, and happenings. APM has become a vital resource for parents and family members in every part of the globe.