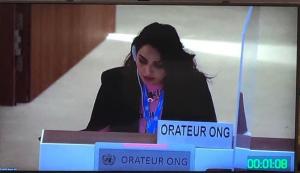 Houthi militias steal childhood and violate all rights of the child in Yemen”
— Dr.Wesam BA Sondowah

In her speech before the Human Rights Council at its 49th session, which came within the framework of the interactive dialogue, on the sale and sexual exploitation of children, BA Sondowah added that, the Houthi militias steal childhood and violate all rights of the child in Yemen. Dr.Wesam explained that, the terrorist Houthi militia purchased more than 35,000 children for recruitment, according to a statistic published in 2021.

BA Sondowah continued, “Four leaders of the terrorist Houthi militia in Al-Dhalea governorate married minors between the ages of 9 to 13, the last of which was the marriage of a Houthi leader to a girl who studies in the sixth grade of primary school. The marriage is legally void, and it was ordained by judges affiliated with the Houthis, and there are dozens of similar cases that are kept.”

Dr.Wesam BA Sondowah expressed her thanks to the Council, for the report that was presented regarding the violations against children in Yemen, and declared her support for the observations and recommendations contained therein, especially paragraph 91, which dealt with the importance of justice and rehabilitation of child victims of sale and sexual exploitation.