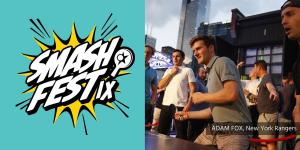 It’s incredible to have SMASHFEST here. We’re fortunate to participate and be a voice for all rare cancers that need to amplify the critical need for research funding to find curative treatments.”
— John Hopper, President of the Fibrolamellar Cancer Foundation

An event like no other, SMASHFEST, a nonprofit event organization created in 2012 by NHL alum Dominic Moore, holds ping pong tournaments in the U.S. and Canada with NHL and celebrity guests, in an effort to raise funds for rare cancer and concussion research. SMASHFEST Stamford, which will take place at The Loading Dock (375 Fairfield Avenue, Stamford, CT 06902) on August 12th at 6:30pm., turns fans into friends, giving guests a one-of-a-kind experience with NHL stars and other celebrities.

For the first time that SMASHFEST comes to the Northeast U.S., Greenwich-based, Fibrolamellar Cancer Foundation, a rare cancer organization, finds itself as the local example of a rare cancer that will see specific awareness for its cause at SMASHFEST Stamford.

John Hopper, President of Fibrolamellar Cancer Foundation (FCF), said, “It’s incredible to have SMASHFEST here in our own backyard. We are fortunate to participate in the event and be a voice for all rare cancers that need to amplify the critical need for research funding to find curative treatments.”

Fibrolamellar Carcinoma (FLC) is an overlooked, aggressive liver cancer that strikes teens and young adults, who are typically not diagnosed until the cancer is in an advanced stage. Currently there no known effective systemic therapies to treat Fibrolamellar and the five-year survival rate is alarmingly low.

Each year, approximately 1.7 million people in the U.S. are diagnosed with cancer. Of those, more than 25% (or 550,000+) are considered rare cancers. And every pediatric cancer is a rare cancer. SMASHFEST brings attention to the fact that rare cancers are grossly under-researched and often blanket therapy regimes that are designed for other types of cancers. As a result, patients typically do not have high survival rates.

SMASHFEST gives the public a chance to support rare cancer and concussion research. Both face similar obstacles as they are hindered by scattered and scarce data, limited resources, and a lack of information-sharing.

Anyone can purchase tickets to attend SMASHFEST as a ping pong tournament participant or as guest at the event.

Join the fun with a SMASHFEST Pass!
Tickets and sponsorships are available now for SMASHFEST Stamford. All attendees have access to the event which includes:
• face to face interaction with NHL players throughout the night
• catered buffet from a world class chef
• unlimited drinks (open bar for 21+, mocktails for kids)
• live silent auction with one-of-a-kind items
• raffle prizes and more
Corporate sponsorships are also available. Email for details: sponsorship@smashfest.stardevpreview.com

See the SMASHFEST website for other information and follow @SMASHFEST on Instagram for the latest event updates. More players and celebrities attending the event will be announced as the event approaches.

About Fibrolamellar Cancer Foundation:
FCF, a public 501c3 nonprofit organization based in Greenwich, CT, was founded in 2009 by 27-year-old Tucker Davis, who lost his life to Fibrolamellar after an 18-month fight. FCF has funded nearly $10 million in research across more than 24 major institutions in the U.S. and internationally. 100% of all donations go towards research. All FCF’s overhead and administrative costs are paid by the Charles A. and Marna Davis Foundation and Stone Point Capital. For more information, visit www.fibrofoundation.org and also interact with us on our social media channels: Facebook, Twitter and Instagram.