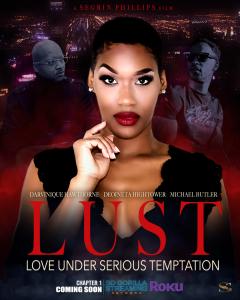 This film takes a journey inside the mind of a cheating wife and the devious steps she takes in the pursuit of happiness, This film explores the other side of the infidelity coin.”
— Segrin Phillips

“This film takes a journey inside the mind of a cheating wife and the devious steps she takes in the pursuit of happiness,” Writer and Director Segrin Phillips said. “This film explores the other side of the infidelity coin.”

LUST is the seventh film from African-American filmmaker, and CEO and Founder of So Gorilla Films Media, Segrin Phillips. The highly-anticipated drama highlights a relationship gone wrong with infidelity, revenge and scandal. Through the lens of the African-American leads, the film everybody is talking about shows the mindset of the cheating wife and the drama surrounding her and her family.

Segrin Phillips is the writer and director of LUST. He is the first African-American filmmaker in history to write, shoot, direct, edit, executive produce and compose music for his own films. Phillips distributes his and other films on his own streaming network currently available on Roku. Additional streaming platforms will be announced at a later date.

For more information on the So Gorilla Streaming Network, visit their channel on Roku and follow them on instagram @sgsnetwork_rokutv.

About So Gorilla Films Media

So Gorilla Films Media, LLC is a full service film and media company. They specialize in shooting, directing, producing and developing major motion pictures, short films, television shows and web content. They pride themselves in delivering quality content worldwide for people of all ages to enjoy. For more information, visit their Channel on Roku.