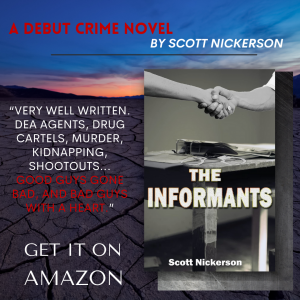 The Informants tells a story of duty, honor, and power of intelligence inspired by Nickerson’s real life DEA experiences.

Concise, realistic, and entertaining. Gave me flashbacks to how things happen in the real world of [narcotics] trafficking.”
— Chip Lollar, DHS, Retired

MONTGOMERY, AL, USA, April 27, 2022 /EINPresswire.com/ — Scott Nickerson‘s debut novel, The Informants, tells a thrilling story of murder, betrayal, and heroism based on experiences from Nickerson’s time as a DEA Special Agent in the Los Angeles Field Division. Nickerson’s real-world experiences in the DEA, the people he met and worked alongside, the villains he faced, the heroics he witnessed, and the betrayals he endured –are the inspirations for a story that could’ve been ripped from today’s headlines.

Inspired by other realistic fiction writers like Tom Clancy & Jack Carr – Nickerson tells us a story meant for the big screen through the eyes of the people who live it. Multiple storylines, agendas, investigations, and perspectives come together in an explosive finale worthy of a summer blockbuster.

The Informants introduces us to Julian Castro Rodriguez, AKA: El Jefe – leader of the world’s most violent drug cartels. His wife has just been poisoned, and El Jefe has placed a 10 million dollar reward for information leading to the capture of the assassin, or the identity of the mysterious individual who ordered the hit.

Meanwhile, the DEA holds a conference in Los Angeles, bringing together a task force to investigate and bring down El Jefe’s cartel. These two worlds collide when Toro, a Cartel enforcer, kidnaps a DEA agent for leverage and information regarding the individual who ordered the murder of El Jefe’s wife.

Suddenly, agents in the field are thrown into a full-blown cold war – with both sides using their web of informants to gather intelligence on their opponents. These agents must balance their duty all while battling forces that play by a different set of rules. To tip the scales in their favor the agents begin operating outside the agency’s drawn lines of right and wrong, producing both legendary and catastrophic results.

About the Author
Scott Nickerson is a former DEA agent who spent nine years in the Los Angeles Field Division – the front line in the War on Drugs. An Alabama native, and 2003 graduate of Auburn University with a degree in Criminology, Nickerson brings his real-world experiences to life in his debut novel. The Informants can be found on Amazon both in paperback and as an e-book.