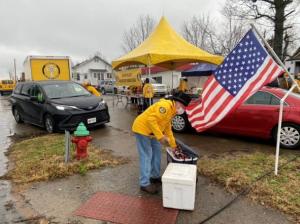 Scientology Volunteer Ministers man a Point of Distribution (POD) site to offer needed supplies to those affected by the disaster. 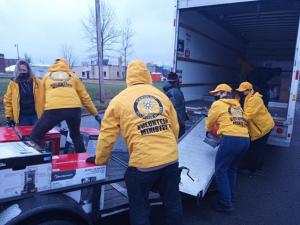 Volunteer Ministers unload donated propane heaters at distribution site for supplying to those with no power. 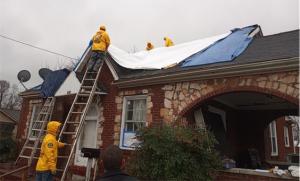 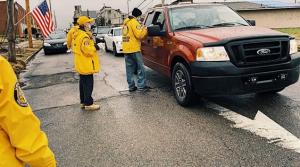 Working with a local food company who grilled the meat, Volunteer Ministers distributed over 10,000 burgers, hot dogs, roast beef sandwiches and other food to long lines of cars. 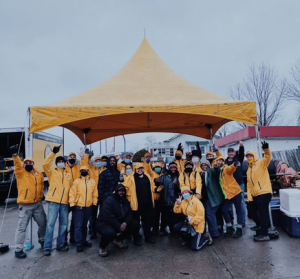 Churches of Scientology Disaster Response Volunteer Ministers gather with Tyson Foods and the local food truck volunteers at the Mayfield Point of Distribution (POD) for a group photo.

With thousands of homes destroyed, dozens dead and many missing, those who survived are being helped by volunteer organizations

Addressing the physical needs is vital but emotional and spiritual care is also paramount to recovery.”
— Joava Good, Churches of Scientology Disaster Response

WASHINGTON, DISTRICT OF COLUMBIA, UNITED STATES, December 28, 2021 /EINPresswire.com/ — The evening of Friday, 10 December, in Mayfield, Kentucky, was horrifying to those who lived there as late-season tornadoes roared through their town. Several powerful tornados ripped through six states leaving many in southwestern Kentucky homeless and without their businesses. Over 3,000 homes were destroyed in eight different counties, with 88 confirmed dead and over 100 still missing.

Hearing the news that night, Church of Scientology staff in Nashville, Tennessee, immediately contacted their church members in Mayfield. While the members were physically safe they had lost everything, even their livelihoods.

Responding quickly, Churches of Scientology Disaster Response (CSDR) Volunteer Ministers were deployed from the Nashville area. In the following days Scientology volunteers drove and flew from Twin Cities, Chicago, and other areas. Their main base was set up at the Church of Scientology in Nashville. Each day trucks were loaded up with food, bottled water, sanitary supplies, tarps and other supplies and then traveled north into southwestern Kentucky to set up Points of Distribution (POD).

Arriving at one of their destinations in the Mayfield area, Volunteer Ministers, in their signature yellow shirts and jackets, collaborated immediately with organizations such as World Central Kitchen and Tyson Foods, and local food trucks, who were distributing meals, hot coffee, hot chocolate, propane heaters and other supplies to thousands affected by the storms.

Joava Good, Deputy National Director for Churches of Scientology Disaster Response, and lead responder, flew in from Salt Lake City, and said that she was thrilled to be working with such wonderful disaster volunteers. “One day we fed over 3,000 people working with World Central Kitchen and Tyson Foods and a local food truck. The next day we handed out 6,000 meals and the following day 2,500 to 3,500 meals in the pouring rain. Helping those in need is the core of what I believe. Your reward for helping others is a ‘thank you’ or a big smile that melts your heart and the fact that you added some stability to a chaotic scene.”

“We had our volunteers directing traffic, blue tarping damaged roofs to prevent further damage to homes and cleaning up debris-strewn lots including a local Episcopal Church property. The church grounds were cleared of shingles, bricks and wood left behind by the tornado. Cleaning up the property will enable it to be used for more distribution of supplies,” Ms. Good continued.

Volunteers from different faiths joined in prayer circles. “Just being there, listening and supporting those who had lost loved ones was a blessing,” related one volunteer. “Addressing the physical needs is vital but emotional and spiritual care is also paramount to recovery.”

Another volunteer relayed a simple but rewarding story: “A woman who had no power came by our supply distribution tent for food for her family and wanted six meals. We gave her the meals and then gave her a portable grill for cooking so she could fix her own meals. She was so happy that she jumped out of her car and thanked all the volunteers profusely. This is our ‘pay.’ This is our reward worth more than a million dollars: the love of others you help,” remarked the volunteer.

Joava Good summarized the purpose and commitment of the Scientology volunteers in this way: “Seeing the motto of the Volunteer Ministers of ‘Something Can Be Done About It’ unfold each day while in the field was a joy to my heart. This is hard work, but something I would do any time I’m needed.”

Scientology Volunteer Ministers continue to help those in need not only in the Mayfield area but areas not getting media attention around Dawson Springs and Bowling Green.

The Church of Scientology Volunteer Ministers program is a religious social service created in the mid-1970s by Scientology Founder L. Ron Hubbard. Mr. Hubbard stated, “A Volunteer Minister does not shut his eyes to the pain, evil and injustice of existence. Rather, he is trained to handle these things and help others achieve relief from them and new personal strength as well.”

The Scientology religion was founded by author and philosopher L. Ron Hubbard. The Founding Church of Scientology in Washington, DC, was formed in 1955 and the religion has expanded to more than 11,000 churches, missions and affiliated groups, with millions of members in 167 countries.