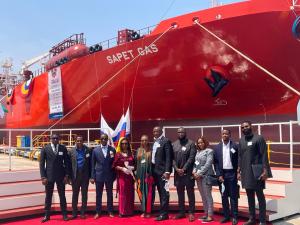 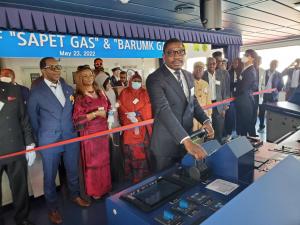 SAPET Energy is on course to deliver the initial 12,000 MT LPG storage facility that is expected to be the biggest in sub-Saharan Africa and increase the the nation’s storage capacity by about 60%.”
— Olayemi Odutola, Managing Director, SAPET Energy

Named MT SAPET (combined name of Sahara and petroci) with the Ivorian flag colors and MT BARUMK (with the Nigerian flag colors) the additions who will be focused in the West African region, now compliment two members of their fleet (MT Sahara Gas and MT Africa Gas who are regular callers to the Abidjan port. Both MT Africa Gas and MT Sahara Gas were also built by Hyundai MIPO Dockyard in South Korea very recently.

Sahara Group, through its collaboration with the Nigerian National Petroleum Company Limited (NNPC) and WAGL Energy Limited has invested over $300 million ( CFA180 billlion) in ramping up gas infrastructure, with plans to add 10 vessels in 10 years, to drive energy transition in Africa.

“With an investment of over CFA 279 billion since 2014 into facilitating the supply of LPG in Cote D’Ivoire, Sahara Group continues to give over 26 million Ivorians access to safe, reliable and cleaner fuels. The commissioning of the two new vessels will further enhance timely and efficient supply,” said Wale Ajibade, Executive Director, Sahara Group who is also a Director of the SIR refinery and Sapet Ltd (a joint venture between the Sahara group and Petroci )

Commending President Ouattara and the Ivorian Government for its robust gas optimisation initiatives, Ajibade said the MT SAPET Vessel will proudly carry the flag of Cote D’Ivoire in demonstration of Sahara Group’s commitment to SAPET Energy SA, the joint venture between Sahara and Petroci (the National Oil and Gas company) which was established to shore up LPG access, supply, storage and distribution.

Ajibade noted that Sahara Group had at the inception of the JV committed to promoting LPG sustainability in CIV through investments in enabling infrastructure, technology and human capital. “The name MT SAPET was derived from our joint venture, SAPET Energy. It will be the pioneer LPG vessel to be named under Ivorian origin and to carry the flag of the country. We are not only making history today, we are building a future where cleaner fuels will drive the well-being of the good people of Cote D’Ivoire, promote environmental sustainability and ultimately, bolster economic development in the sub-region,” Ajibade added.

Mr. Vamissa Bamba, Director General, Petroci, said the beneficial relationship the state owned entity has with the Sahara Group and its affiliates across the energy value chain has helped the nation achieve its energy needs, adding that the LPG collaboration would enhance economic development. He commended the Sahara Group for remaining committed to the country’s development, adding, “Together, we will transform LPG access in Cote D’Ivoire and the sub-region.”

In addition, the Chairman of SAPET Energy, Georges Kam Sie said the JV would bring hope for LPG to Ivorians with accompanying benefits for the economy.

According to Olayemi Odutola, Managing Director, SAPET Energy, the JV is currently ramping up on construction works with several technical and financial partners in the nation with respect to the project. “SAPET Energy is on course to deliver the initial 12,000 MT LPG storage facility that is expected to be the biggest in sub-Saharan Africa and increase the the nation’s storage capacity by about 60%. This equally paves the way for more LPG supply to neighbouring Burkina Faso, Mali and Guinea to drive seamless transition to safe and reliable LPG across the sub-region,” he said..

Edem Degbor, Country Manager, Sahara Group said hundreds of jobs will be created during the construction phase, as well as subsequent maintenance, of the storage facility for Ivorian nationals, including. local agents, product inspectors, contractors, and construction workers, among others.

Degbor said the market will continue to receive LPG from MT Africa Gas and MT Sahara Gas, which have since 2018 delivered about 900,000 Metric Tonnes of LPG to the Ivorian market.

LPG is the fastest growing petroleum product in sub-Sahara African over the last decade, with forecasts indicating that LPG will grow at 7% Compound Annual Growth Rate (CAGR) over the next 15 years.