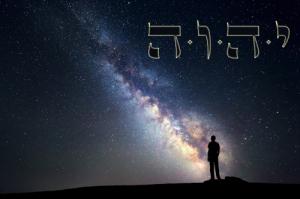 The primary Name of G-d is the Tetragramaton. It is spelled with 4 letters and has a Gematria (numerical value)of 26.

Scientific Proof of The Creator’s Name Adapted from the Writings of Yosef Sebag – Physicist, Electrical Engineer and Founder of DafYomiReview.

USA, February 6, 2022 /EINPresswire.com/ — Jewish Kiruv (Outreach) Organization BeEzrat HaShem Inc. releases new film with the goal of presenting scientific proof for the God of Israel in a simple-to-understand format. The movie is narrated by Rabbi Yaron Reuven in English but translated into eight other languages in order to reach audiences across the globe.

This life-changing journey into the construction of the Universe is adapted from the work of Yosef Sebag, who has been working closely with Rabbi Yaron Reuven and the BeEzrat Hashem team over the past two-and-a-half-years.

The inspiration for the film came from Yosef Sebag’s article titled: “G-d in Nature”. His original article links God’s four letter Name to the number four being a fundamental property to the construction of the universe. Sebag also details how the Gematria (numerical value) of God’s Name being 26 is repeated as a key mathematical pattern. Some of the topics discussed include: particles, the solar system, DNA, atomic elements, and Pi.

Yosef Sebag is a Talmid Chacham who completed degrees in physics and electrical engineering at the University of Massachusetts, Amherst. He was a research associate in nuclear physics before leaving to study in Yeshiva. He is currently learning full-time in a Jerusalem Kollel and has published various English translations and commentaries of Torah works.

Subtitled versions of The Signature of God are available in: Hebrew, Spanish, French, German, Portuguese, Russian, Turkish and Indonesian. These versions can be found in the corresponding Rabbi Yaron Reuven YouTube Channels.